District 4 Councilman Joe Watson has announced his intention to seek re-election to the post he has held since 2008.

“District 4 needed a representative who would push for progress and improvement,” Watson said. “With help from the people who have been there all along, we have had success. In this press release, I think it’s imperative to list the accomplishments which offer proof of a positive record of progress that we can build on for the next four years.” 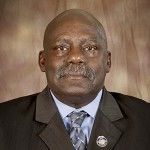 Watson said new paving started in his district as soon as the city was financially able to start a new program in 2013 with Underwood, Brooks, Rankin, East Street, North East Street and Martin Luther King Drive paved in the past three years. More streets will be included in the coming years.

“As soon as there was money available to put into improvements,” Watson said, “I was instrumental in making sure District 4 received the funding needed for improvements. We have come a long way, and with the support of the people I will not stop until we get the work done.”

In addition, District 4 water and drainage as well as sewer lines were upgraded on Lovelace Avenue and Conley Avenue. Watson said he worked to secure a $100,000 budget line item for the John L. Fisher Community Center early in his first term, and pushed to see that the funding would be used for renovations at the center. Watson was active in the successful push for a new playground installed. With help from the city, multiple activities  have been started at the center for children and adults. In the last four years, the center has hosted the Soul Food Blues and Jazz Fest, Bicycle Rodeo, Video Game Tournament, Weekly Bingo, Summer Fun Mondays, two job fairs and more. Watson is passionate about the John L. Fisher Center’s success and will work hard to make sure it continues to thrive and be a vital part of Brewton.

Watson was instrumental in securing quality entertainment for all city residents including the Jeff Floyd concert at the New Year’s celebration this year, and the Mighty Temptations Review with Dennis Edwards in the spring. The city is now working on a splash pad and other water features for the children by next summer with Watson pushing for the project in District 4.

“I am here to serve, and I am always ready to listen,” Watson said. “We will continue to work together and improve our district and our city.”

“The needs of the people have always come first with me,” Watson said. “I will continue to work in unison with the council.  Further endeavors include seeking wholesome activities for young people, opportunities for job training and job enhancement for our city. That’s what all our work is for and we have to keep working for that goal. The community is and has been the number one reason for serving and councilman of District 4. I ask for your continued support on Aug. 23 to keep moving toward a better District 4.”