Cleo McClain Jr. has announced his intention to run for the seat of District No. 2 city council.

McClain said he is running for District No. 2 city councilman because he wants to represent the “voice of many” that go unheard.

“I desire to advocate for change and last but not least, provide clarity to all the people,” McClain said. “I want to become a part of this board/committee who represents the community because I understand how extremely important it is to be represented by someone who understands the voice and heartbeat of the people. 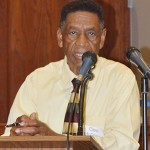 McClain was born in Brewton. At the age of 10, he departed Alabama to live in Toledo, Ohio where he finished school. While in school he worked part-time at the bowling alley, delivered the Toledo Blade newspaper and sold ice cream.

After finishing high school he was employed at Don’s Restaurant. He entered the military in 1964 and was classified as a combat engineer. After about a year in food service he was inspired by his Sergeant to drive the food supply truck. On the weekends McClain would go to the kitchens to help the cook prepare the meals. Later his first sergeant indicated that he was dependable and a good worker and if he wanted to advance in rank he would have to change his M.O.S. to food service. McClain requested the change and received a cook M.O.S.

“Years later I was selected to attend N.C.O.S School and Non-Commission Officer school, “ McClain said. “I graduated as the number two person in the class of about fifteen students.”

McClain spent time stationed in Germany, Vietnam, and Korea for overseas duties. His last stateside assignment was at Ft. Benning, Ga., where he retired in June of 1989.

After retirement McClain returned to Brewton and opened a club called, Cleo’s Touch of Class, for about two and half years. He worked at Alabama Ductile until 1996, Department of Corrections until 2006, Avant Vault Service until 2010 and today works with Escambia County Habitat for Humanity Restore.

He is a member of Baptist Hill Missionary Baptist Church where he serves as chairman of the trustee board, usher and light maintenance personnel/janitorial service. He also serves as secretary for the Gentleman’s Motorcycle Club, which was established June 2011.

“I am a part of the community. I know and understand the concerns,” McClain said. “I have engaged in conversation where they were brought to light.”

Some questions McClain want’s to address as councilman are city improvement projects such as road work projects, speed signs and proper lighting in communities, sanitation personnel accountability and resourceful use of vacant lots.

“I have great concern for this district and the board committee so your voice will be amplified and not muted,” McClain said. “Voting for me is voting to be heard and I will listen. I ask for your support on Aug. 23 so we can come together to improve District No. 2.”