Tigers look to work on basics 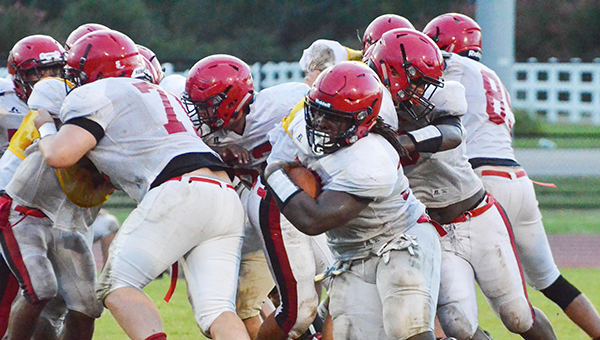 The T.R. Miller Tigers will head to Chatom on Friday to take on the Washington County Bulldogs.

“It’s the simple things we need to clean up,” Thomas said. “Like on our exchanges, snaps and ball handling. Those are easy fixes I feel like that we have to address. It’s a learning process with our offense. We’re still behind on some stuff. It’s going to be a growing process throughout the year.”

Thomas said his defensive line did some good things, but as a whole, the team has to get better at tackling, which comes with being more physical.

“There were some big plays on offense that happened just because we missed a lot of tackles,” he said. “Our backend guys got to tackle better. We need to play tough and physical. We’re getting better each week but we’re not there yet. If we struggle tackling we’re going to be in for some long nights this season.”

Thomas said this Friday’s preseason exhibition versus Washington County will be a good test for the Tigers and an opportune time for the coaching staff to evaluate the team.

“We have a game plan, but really more than anything it’s really about evaluating ourselves and to address the things we know we have to get better at doing,” Thomas said.

“It’s good to go against a team like Washington County because traditionally they’re a physical team. They have a good (running) back, one of the better ones we’ll see all year. It’ll be a good test for us to see where we’re at as a team.”

Washington County was 10-3 last season and are considered a favorite to be atop of the 2A-Region 1 standings again despite losing a good number of graduating seniors, including all-state players Cedric Abrams, Keyshaun Abston and Josh Morris. But the team returns first team all-state selection, junior Austin Kinsey who rushed for over 1,957 yards and 25 touchdowns last season. Also returning on defense is all-state senior linebacker Michael Anderson who led the team with 118 total tackles.

Kickoff in Chatom will be at 7 p.m.