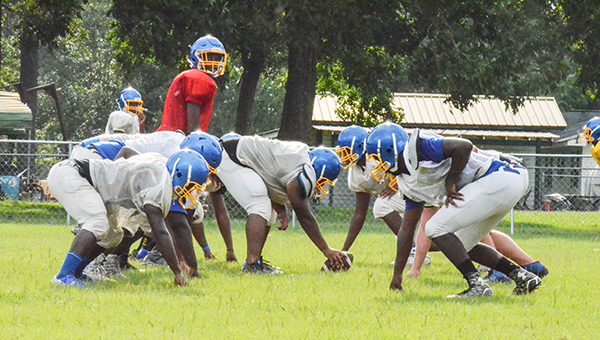 Corey Williams | The Brewton Standard
Neal quarterback Jacobey Hawthorne checks with the receiver split to his right as the line gets ready for the snap at a team practice.

W.S. Neal will play its preseason game at home Friday against the Aliceville Yellow Jackets.

WSN head coach Doug Hoehn said the game will be used to evaluate and possibly solidify skilled positions up for grabs after the departure of key players due to graduation.

“We have (Jacobey Hawthorne) this year at quarterback as far as returning starters, that’s the only skilled position, we’re going to take a hard look at the rest,” Hoehn said. “We have some positions that we have a good idea about, but are not set in stone. After this game will have a better idea.”

Hoehn said his players are working hard in the weight room and on the practice field.

“We have a really great group of kids this year,” he said. “They’re working really hard.”

Neal’s opponent on Friday, Aliceville, dropped down from 3A to 2A after reclassification earlier this year and are considered a favorite to win its region made up of Billingsley, Francis Marion, Keith, R.C. Hatch, Thorsby and Verbena. Aliceville went 6-5 last year.

Kick off in East Brewton will be at 7 p.m.