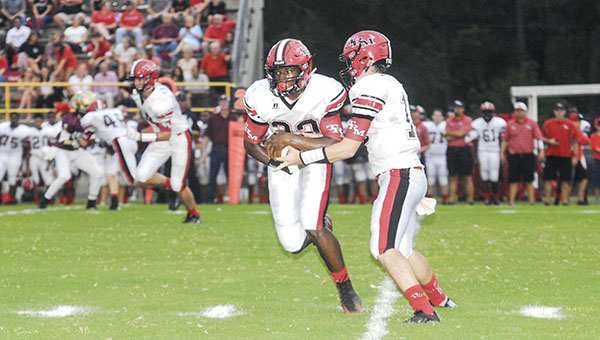 TRM found the score board first in the first quarter after senior quarterback Caleb Winton found JoJo Booker for a 19-yard touchdown reception. Matthew Morgan point after attempt was good for a 7-0 lead with 2:14 left in the opening quarter.

TRM had a final drive inside the 10-yard line but the Bulldogs defense forced a turn over on downs to end the game.

The Tigers running game was led by junior Demarquis McMillan with 75 yards on 11 carries. Michael Campbell rushed for 46 yards on eight carries. The Tigers had 142 total rushing yards.

Winton passed for one 19-yard touchdown and had one interception.

“We played a quality 3A team ranked number three in the state,” said Washington County head coach Al Earnest. “Obviously, there were some good things we can take from the game to work on before next week. We had some nerves tonight and you could see it in the first game. I look to see (TRM) again around the third round. I’m glad we came out with no injuries and that was a plus for us. We want to give God the glory, praise and honor for all he has done for giving us a chance to compete. We are getting ready for a tough Millry team. Coach (Greg) Crager is doing a great job in Millry. I look for them to be a very tough opponent.

“We were able to sustain a few drives on offense and only punt one time,” he added. “We did some things well. We got a fake punt and some big yards following that play to keep the drive going. To be able to sustain drives for us is a huge plus for our offense. We were able to run the ball with some consistently. I think we started early in the first quarter but in the second quarter we handed the football better. Cade at time was pretty good and saw things but we have to clean up the execution and learn to finish. Cade did well as a junior stepping out after a good spring game against Green County. It was second time out under the lights an it was a learning experience. That is why we played a good team in the spring with Greene County with double iron enrollment to now playing a quality team like T.R. Miller. Bible tells us iron sharpens iron and hoping that is what it will do for us.”

“We are doing a lot of new stuff and we are struggling mentally to adjust,” Thomas said. “We have to get a lot better I can tell you that. I was impressed with Washington County’s physical style. We have a long way to go. We made a lot of mental mistakes. The biggest thing here you want to evaluate is your physicality early on before you go against somebody else just to execute basic stuff. We had one bad read on offense that cost us six points on that pick six. We had a lot of missed assignments. Two or three times we had backs going the wrong way which is simple stuff we can fix. We play Opp at home next week who are a very athletic team. They spread you out. Next week’s game is going to be a real athletic game and a test for us.”