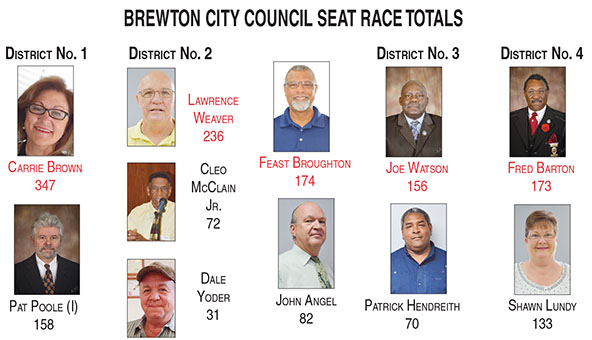 “I am both humbled by the faith placed in me by the people of this city I love so dearly, and energized to keep moving Brewton forward,” Lovelace said after his win. “I would like to thank those who voted for me, and assure those who did not that I intend to keep working for all our citizens to make a great city even better.”

Nalty expressed his thanks to supporters.

“I thank the people of Brewton who voted for me, and those who didn’t, I hope to gain your confidence and support over the next four years,” Nalty said. “(Lovelace) did an excellent job in his capacity so far, and I wish him and all the candidates my best.”

In District No. 4, the incumbent Joe Watson defeated Patrick Hendreith 156 votes to 70.

In District No. 5, the incumbent Fred Barton defeated Shawn Lundy 173 to 133.

“I would say it was ‘average’ at best,” Yuhasz said. “Any time you have these races on the ballot, people are going to turn out.”