John Braxton Rhodes is a 12-year old on a mission. Thanks to some unique opportunities, his mission may have just reached orbit.

The W.S. Neal Middle School student had a busy summer, from attending space camp in Huntsville, to 4-H camp, then serving in World Changers in Florence, to visiting the nation’s capital to participate in the 2016 Junior National Young Leader’s Conference, all this while also trying to fit in time for football practice. 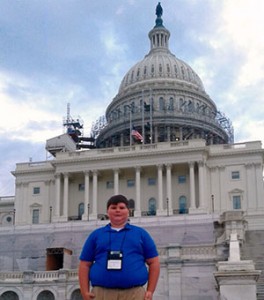 “It’s been a busy summer,” Rhodes said. “I’ve only had a few weeks to myself.”

Mother, Susan Rhodes, said the summer has a been a great developmental experience for her son.

“When opportunities are out there you want to try to get it, because you never know what we’ll spark and say, ‘This is my calling.’” Ms. Rhodes said. “I try to expose him to as many things as possible.”

After the conference in Washington, D.C. this summer, Rhodes was one of two students invited to attend the Presidential Inaugural Leadership Summit at the nation’s capital in January. The opportunity will allow Rhodes to attend the presidential inauguration and inaugural ball at the Smithsonian.

Ms. Rhodes said as great as the opportunity and experience is for her son, the trip is financially a tough task to accomplish on her own. Hotel and food will be covered. Rhodes recently was awarded $500 for his Leadership essay on Franklin Delano Roosevelt that will go towards his tuition. In total, the trip will cost $2,500, with the added $500 scholarship for her son, and if Ms. Rhodes plans to go, another $2,000.

“As a single parent I want to do all that I can get him to go, but I just can’t let him go by himself to something like that,” Ms. Rhodes said. “Security wise I’m kind of nervous.”

Ms. Rhodes said she has sent letters to organizations in the community and county, such as the Family Foundation, 4-H and Alabama Farmers Federation, to help her with funds, but to this point has had little luck.

“There’s no foundations or grants I’ve found to this point that will help for a leadership activity like this,” she said. “It’s not done through the school and he’s not a nonprofit organization.”

An account has been set up to go towards Rhodes’ tuition and travel fees. To help, contact Susan Rhodes at 251.227.2616

Still, the young Rhodes doesn’t seem to waiver with the events ahead and a future that is open to a vast plane of possibilities.

“My big focus is electrical engineering but I have looked at law,” he said.

He also spent some time as a volunteer for mayor candidate, Frank Nalty.

“His second grade teacher said he’s going to either be a preacher or a politician because he likes to talk,” Ms. Rhodes said.  I’ve always laughed and said governor of 2044, but he gets mad at me.”

Rhodes said he plans to attend robotics camp in Huntsville next summer.