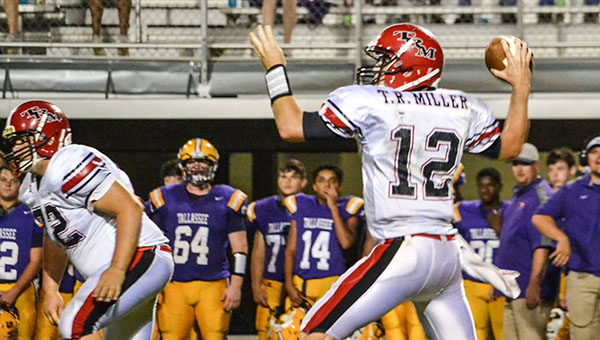 Courtesy photo
No. 12 Caleb Winton throws against Tallassee last season. The Tigers ended up winning the close game 17-14, the team’s first win of the season.

T.R. Miller senior quarterback Caleb Winton loves playing football. Ever since his dad introduced him to the game, in the countless times he’s thrown the pigskin in the front yard with his twin brother, Joshua, and in the times playing flag football at the YMCA his heart has been in it. He loves studying the game and the breakdowns of defensive schemes. He loves the countless reps demanded at a summer practice in sweltering heat. He loves the atmosphere of “Friday Night Lights.” The only match to Winton’s obsession for the game of football is his Christian faith. It is that faith and his love of Jesus Christ that guided him to this point in his life. That point is realizing his life-long dream of playing college football evidenced by his recent verbal commitment to play at Shorter University.

“I visited (Shorter) over spring break, and I loved the school,” Winton said. “I got a chance to meet the coaches and go to one of the practices. I love the coaching staff. They’re really energetic. They love football just as much as me.”

Shorter University is located in Rome, Ga., and is an institution set on “building a thriving academic community where all can gain a greater appreciation of God’s grace, a more profound understanding of His principles and priorities, and a clearer vision of our place and purpose in the world.”

Academically, the school has top marks, which is right up Winton’s alley as he is currently ranked fourth in his class at TRM, with a 4.4 GPA in the Honor’s Program. He also scored a 32 on the ACT.

At Kelton’s introductory press conference, the newly minted head coach said the team will progress more to a spread type offense rather than the triple option offense it has run in recent years to take advantage of the talent the team has at skilled positions and to help with recruiting players to its program.

Christian faith, Winton credits, has been a heavy influence both on and off the field.

“It puts things in perspective. Because when it comes down to it, football is just a game. I’m not going to play forever. I’m blessed to get the chance to continue my career at the second level but for everybody, at some point, it’s got to end. There’s got to be something after that you can put your faith in and trust and know that no matter what happens, the troubles I go through, that Jesus is going to always be there. That’s something solid that I can press on.”

Last season, Winton ranked at the top statistically among past TRM quarterbacks after completing 63 percent of his passes for 1,867 yards and 15 touchdowns, earning him a spot as first-team All-County quarterback as he helped lead the Tigers to a 10-win season and the third round of the playoffs.

“Last year was one of the coolest things ever to get to go out on the field on a Friday night and play in front of people you’ve known your whole life with guys you’ve known forever,” Winton said. “The more I’m around the game, the more I enjoy it and want to be around it even more. It’s kind of funny, because sometimes guys kind of drag out to the practice field and say ‘Ahhh, I don’t feel like it today’, so guys make fun of me because I’m out there every day, loving it, ready to get out there. They’re like, ‘Dude why are you like that? It doesn’t make sense.’ It’s just something about the game I love being around.”

“As (Winton) became our quarterback last year, each week he grew in confidence and developed this great courage that allowed him to do what needed to be done for his team,” Riggs said. “In the old days, we just simply described someone like (Winton) as a ‘winner’. I know he will have a great senior year for the Tigers this year and I look forward to watching his development into an outstanding college quarterback.”

“He’s always in early, always asking questions and studying things and wanting to get better,” Thomas said. “He’s the type of leader you need at quarterback. He’s a kid I love having on my team.”

Winton said when it comes to the game of football and for this season his goal is very simple— win.

“I just want to win as many games as possible,” Winton said. “We’re changing offenses this season so I probably won’t get to throw the ball as much, but I’m fine with whatever it takes to win games.

“I’ve focused on getting faster and quicker with my feet. In our new offense this season it’s more option stuff, so those are the areas where I really needed to work. Hopefully we get a chance to win the state championship.”

Winton said he plans to study education in college to become an English or history teacher and in the future serve as a quarterback coach and offensive coordinator for a football team.

“Playing college football will open a lot of doors for me,” he said. “I love football and playing it but I’m also interested in coaching. I’ve had coaches who have been instrumental in my life. I’d like to make a difference in young men’s lives like they have for me.”

It’s been a battle