Lady Eagles bounce back against Excel for win 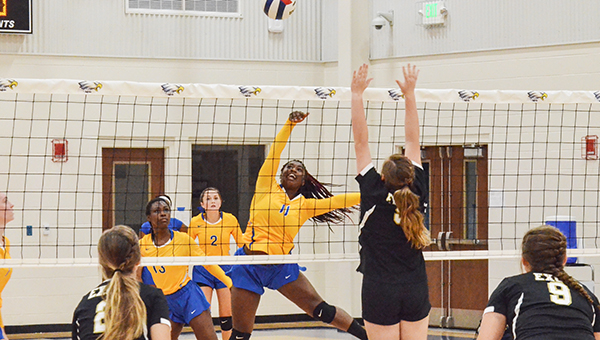 Corey Williams | The Brewton Standard
Neal junior, No. 11 Marishia Fraser, returns the ball over the net against Excel.

The W.S. Neal Lady Eagles varsity team anointed its new season with a win at home versus Excel Thursday. Neal almost made a comeback in the first set after trailing 7-12 earlier. It scored six unanswered points to take a 24-21 lead late in the set, but Excel took advantage of errors on Neal to close out the set with five straight points to win.

Head coach Jason Blaney said he saw a lot of fight in his team.

“We did a great job fighting back against Excel in each set,” Blaney said. “It was a great first game to show us what we need to continue working on, to get to where we want to be this season.”

Neal varsity will next play Tues., Aug. 30, on the road at LeRoy. Games are at 4 p.m versus Thomasville and 5 p.m. versus LeRoy.

Neal middle school, JV and varsity will be in action against Flomaton at home on Thurs., Sept. 1.