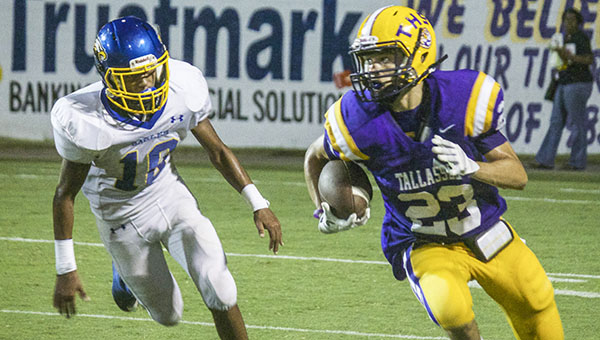 TALLASSEE- It took late game heroics to lift the Tallassee Tigers over the W.S. Neal Eagles 26-21 in a tightly contested game on Friday.

The Tigers took the opening kickoff and started a drive at their own 37-yard line. Quarterback Casey Baynes and backfield mate Markevious Mathews worked behind a solid offensive line that began an all night war with the Blue Eagles defensive line. The Tigers marched 67 yards in 15 plays consuming most of the first quarter. Baynes powered off the left side behind Caleb Stewart, Keno Morris and Ethan Pugh and fought his way to the one yard line before the Blue Eagles could wrestle him down. It was of no use to W.S. Neal though as Baynes lined up in the “Box” and walked into the end zone on the next play as his road-graders cleared the defense out. Nicholas Talley made the point after and the Tigers led 7-0 with four minutes left in the quarter.

W.S. Neal began their own march with their first possession and fought the Tiger defense for every yard until they gained a first and goal at the Tigers four yard line. The defense resisted boldly and pushed them back but Blue Eagle quarterback Jacobey Hawthorne began a sweep to the right on third and goal from the six. Suddenly he tossed to his speedy running back Marvin Maddox who was on his way reversing the ball to the left and trotted in for the score. With the PA the game was tied at seven all with 9:13 left in the first half.

The teams traded punches offensively the rest of the second quarter until Neal fumbled at their own four yard line. Eryn Cochran-Gill picked up the ball and ran into the end zone. The PA was good and Tallassee led 14-7 which was the score at the half.

Neal began the second half scoring with a flash of lightening when running back Marvin Maddox broke loose on an 83 yard dash down the sideline. Jake Baker broke through to block the PA and Tallassee led 14-13 with 5:28 left in the 3rd quarter.

Neal tried an on-side kick but the Tigers were ready as Logan Goodman covered the ball at the Tigers own 46-yard line. Quarterback Casey Baynes needed just one play as he dropped back found Jacob Burton 30 yards down field having beaten his defender. Burton hauled the ball in and out raced his man to the end zone. The PA was blocked and Tallassee led 20-13 with 5:13 left in the quarter.

Neal partially blocked a punt deep in the Tigers end and began a 20-yard drive to the end zone as quarterback Hawthorne crossed up the Tigers on a four yard bootleg and trotted in for the score.

The Blue Eagles then pulled some trickery as they jumped up and ran the ball in for the 2-point conversion and Neal now led for the first time of the game, 21-20.

Twice Tallassee couldn’t move the ball as they tried to fight back. With 6:01 left Baynes attempted to hit his receiver Maddox in the right flat but Maddox slipped down and the ball fell into Marvin Maddox’s hands who was now playing defensive back. The Eagles pulled a fake punt and threw for a first down eating more and more clock.

The Tigers forced a punt and took over at their own 20 with 1:17 left. A roughing the passer penalty on first down moved the ball down to the 35.

Baynes next hit senior Jamarcus Miller for 13 yards followed by hitting Cochran-Gill for another 27 yards and the Tigers were at the W.S. Neal 21-yard line with 17 seconds left.

With 17 seconds remaining, Baynes dropped back to throw but saw no-one open. He never hesitated as he pulled the ball under his arm and took off. He raced for the corner as his receivers helped block down the field and Baynes slipped in for the game winner with five seconds remaining.

The Tigers won a thriller 26-21 behind an effort that ball-coaches only dream of their kids giving. After meeting with his players in private in the locker room Coach Battles came out with a look of “wow” on his face. He coached it, but he watched the kids execute to perfection at the end.

“We practice a two-minute drill every day, but never, I mean never have these kids nailed it like they did tonight,” Battle said. “They drove 70 yards with 1:32 left in the game with no timeouts left. We overcame a quality 4A team in W.S. Neal who is extremely well coached. They had quality kids and played hard clean football.”

Leading W.S. Neal was Marvin Maddox with 13 carries for 178 yards and two touchdowns. Jacobey Hawthorne threw and ran for a combined 99 yards, and rushed for a touchdown.  The Eagles had 306 total yards compared to 267 total yards by Tallassee.

“Our kids played very well,” Hoehn said. “(Tallassee) is a physical football team. We did a lot better as far as turnovers. We improved on penalties, but still we had too many at the end of the game that hurt us. We have to improve on penalties going into our next game.”