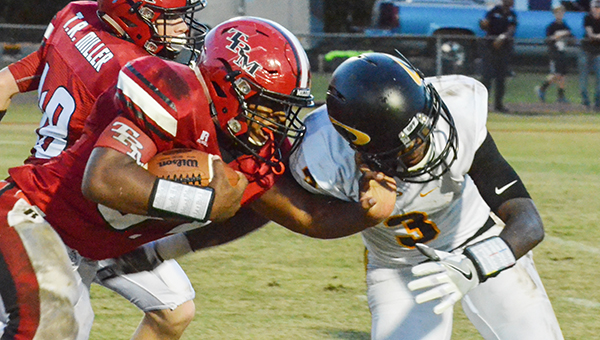 Corey Williams | The Brewton Standard
TRM running back Demarquis McMillan attempts to get by Opp defensive back Reggie Thompson. Mcmillan had 157 rushing yards in the Tigers loss Friday night.

Down 24-20 with less than 30 seconds to play, T.R. Miller quarterback Caleb Winton dropped back for a pass down field. In the secondary, anticipating the throw, was Opp defensive back Tye Lindsey. Lindsey would take the interception 61 yards run for the touchdown to put the game out of reach for the Tigers and give Opp its first win of the season.

Opp head coach Brent Hill said the game was that of a typical close-knit contest between the two schools as seen in recent years.

“I think both teams can say there was some sloppy moments in the game,” said Hill. “I felt (TRM) had some turnovers in the first half, and in the second half came out and punched us in the mouth. We had to wake up and get back after it. It was our first game. We had some big plays that I’m excited about. Defensively, I think our boys played outstanding, but there is some things we have to improve on like coverage. The biggest thing I’m proud of is the effort. I know it’s a tough thing on the T.R. Miller side, but their kids played hard. I’m glad we won. We’ll see what we can do to improve to get ready for the next one.”

Opp put itself on the board when quarterback Orlando Lacey found Lindsey for a 45-yard touchdown pass for the score. Opp failed to convert on the two-point conversion, taking a 6-0 lead over Miller.

With 9:43 left in the second quarter Lacey took the ball up the middle for a one-yard touchdown run. Again Opp failed on the two-point conversion, making the score 12-0.

Less than three minutes later, Miller answered the call when Winton connected with wide receiver Henry Davison for a 14-yard touchdown. Kicker Matthew Morgan added the extra point to make the score, 12-7, in favor of Opp.

With 5:53 left in the second, Opp responded when Lacey found Reggie Thompson for a 40-yard touchdown. Opp failed on the two-point try and went into halftime leading, 18-7.

With 9:20 to play in the third quarter, Winton found tight end Tyrese Nicholson for the Miller touchdown. Morgan added the extra point to make the score 20-14 in favor of Opp.

Later in the quarter the Tigers took its first lead of the game when running back Demarquis McMillan punched in a three-yard run for the touchdown. Miller led 20-18 after the failed extra point attempt.

The lead was short-lived, as Lacey found an opening for a 15-yard run for the touchdown. Opp failed on the two-point attempt to lead 24-20.

Miller received the ball with 4:43 left to play in the fourth. The Bobcat defense held the Tigers to a fourth and ten with 2:40 left in regulation. Miller opted to punt, and wouldn’t get the ball back on offense until 45 seconds left to play. In desperation mode Miller threw the ball, leading to an interception by Opp to seal its first win, and Miller’s first loss of the year.

Leading Miller was McMillan with 17 carries for 157 yards and a touchdown. Jo Jo Booker had two catches for 80 yards and an interception on defense. Winton was 5-15 pass attempts for 115 yards with two touchdowns and two interceptions.

TRM had six turnovers, five of which came in the first half. Opp had 15 penalties compared to Miller’s eight.

T.R. Miller head coach Andrew Thomas said despite the sloppy play on both sides of the ball, that his team had a chance to come out the game with a win.

“We had a lot of guys starting their first real football game tonight,” Thomas said. “I felt technically, what we were doing, we played bad. We still had a chance to win the ball game. The kids played hard, but we have to get better at what we’re trying to do on both sides. Offensively, it’s a learning process. Out there we’re doing a lot of thinking and not a lot of playing still. I got to do a better job of coaching at the same time, so it falls on all of us. If we can stay healthy we got a pretty good chance of being a good ball club towards the end of the year.”