A convicted sex offender is now facing new charges after he allegedly lied to police about being homeless. 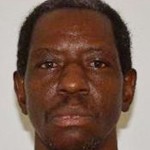 “Mr. Herndon was supposed to be living at 205 Young Street here in Brewton,” Caylor said. “He moved out and then registered as ‘homeless’ with the Escambia County Sheriff’s Office. Our patrol officers answered calls of Mr. Herdon living in the Shady Land trailer park, and we were able to confirm that.”

Herndon was found to be living at three different lots inside the park, Caylor said, and is now facing three counts of failure to register as a convicted sex offender. He was booked into the Escambia County Detention Center.