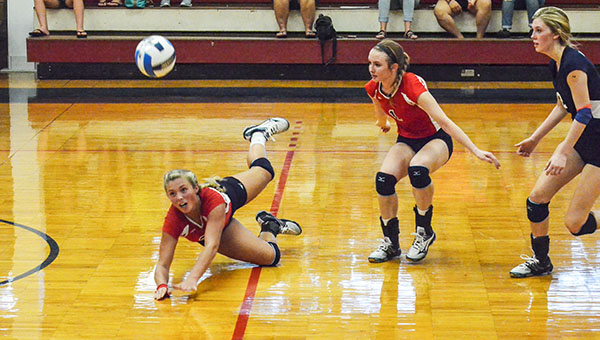 Corey Williams | The Brewton Standard
Morgan Watkins of JDCC goes for the save as teammates Kelsey O’Neal and Katie Whitaker look on.

The Jefferson Davis Community College volleyball team suffered its third loss of the season after dropping its match against Pensacola State College (2-2) on Thursday. The Lady Warhawks lost in three sets: 13-25, 19-25 and 15-25.

JDCC head coach Steven Dickey said Pensacola State is one of the toughest teams his team will face all season.

“We certainly wanted to compete better than we did that first set,” Dickey said. “I think we were awestruck. I thought the second and third sets we competed much better. Our passing was good. Some areas we need to improve on are our defense and not letting the ball hit the floor without maximum effort. We’ll try to run a quicker pace on offense and on defense make sure we know who has the ball when the setter is out.”

Dickey said in his three years as coach this is his best team by far.

“I think the outlook for our conference is good. I expect us to make the conference tournament.”