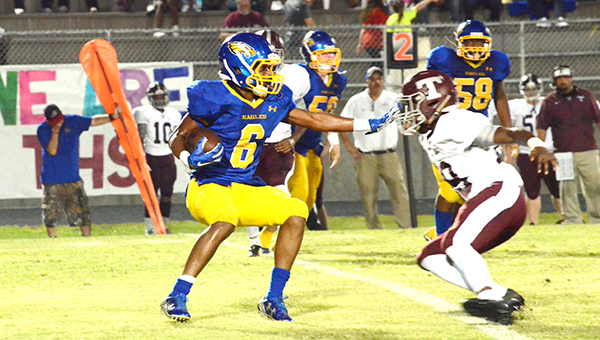 The saying goes, “It’s not how you start, but how you finish.” After leading 20-6 at halftime, the W.S. Neal Eagles were outscored in the second half 20-0 by the Thomasville Tigers to lose its second game of the year and first of the region.

In the first quarter, Neal got on the board off an explosive 53-yard touchdown run by Marvin Maddox. Neal missed the PAT, making the score 6-0.

With 1:20 left in the first, Thomasville answered with a score of its own when running back Romal Taylor ran up the middle for a one-yard touchdown. A missed PAT tied the game at 6-6.

Midway through the second, Maddox continued his good night with a one-yard touchdown run to put Neal back on top. Neal added the PAT to lead 13-6. With 27 seconds to play in the half, Neal added to its point total when Maddox scored on a two-yard run. Neal added the PAT, to go up 20-6.

Midway through the third quarter, the Eagles punted to Thomasville. The carrier took the ball 62 yards before he was met by punter Jacobey Hawthorne at the four- yard line. Hawthorne was slow to get up, and eventually left the game with an apparent left shoulder injury. Thomasville quarterback Chadwick Bryant scored on the ensuring drive on a two-yard run. The Tigers missed the PAT. Neal led 20-12.

Arguably the most important drive of the game lasted from 3:31 in the third to 6:36 in the fourth by Thomasville. As well as eat up the clock, the Tigers capped of the drive with a goal line touchdown run by Taylor. Thomasville opted to go for two points and was successful when Taylor plowed his way up the middle to tie the game, 20-20.

After forcing Neal to go three and out, Thomasville took over at its own 39. With 2:44 left to go, Bryant connected with wide receiver KeShawn Keller for a 31-yard touchdown to give the Tigers the lead. The Tigers failed on the two-point attempt. With its last drive in the game, Neal found itself in a bind, facing a fourth and nine with 44 seconds left to play. New quarterback Christian Wood, who took over for Hawthorne, made an attempt to pitch to Maddox. Maddox was unable to handle the ball cleanly and Thomasville recovered the fumble. The Tigers ran out the rest of the clock to secure the win.

Neal head coach Doug Hoehn said while it was a hard fought game on both sides, the loss is a tough one to swallow.

“We didn’t turn the ball over and didn’t have a ton of penalties so we’re improving every week,” Hoehn said. “We just got to figure out a way for this injury bug to stop. Our kids are playing hard and they’re making less mistakes each game. Some younger kids have to step up now based off the injuries we’re getting.”

The extent of Hawthorne’s injury is unknown.

Leading Neal was Maddox with 23 carries for 149 yards and three touchdowns. Maddox also had an interception on defense and pass deflection in the end zone.

Neal will face region rival, Satsuma (1-1) next Friday. The Satsuma Gators had a bye week this past week.