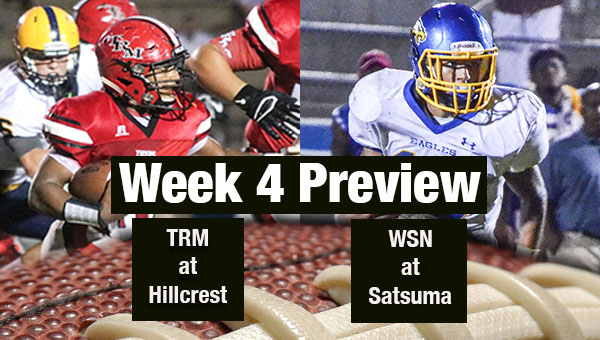 Hillcrest’s dramatic 25-22 win in the third round of the playoffs last season is but a memory, but that goes to say still a rather fresh memory. The loss is no doubt on the mind of the Miller faithful, and for the players who will suit up Friday it’s a source of inspiration to bring home a victory.

The game will be the first test of region action on the road for the Tigers. TRM head coach Andrew Thomas said with how things played out last season against Hillcrest, and the success of taking care and moving the ball against Cottage Hill, his team has plenty of inspiration and motivation in getting ready for Friday’s matchup.

“We’re game planning for Hillcrest but at the same time we’re doing a lot of stuff to try to improve ourselves on our base technique especially on defense,” Thomas said. “Hillcrest is an athletic bunch. They want to spread you on defense. They have a running back who’s athletic and can cause you problems. With that being said we got to tackle well.”

Hillcrest running back senior No. 22, Mikyle Dees rushed for over 700 yards last season and is a staple in the Jaguar offense. Other seniors returning are athletic, two-way player No. 5 Ron’darius Poindexter and linebacker No. 20 Davin Spears.

“(Hillcrest) lost a lot of kids from last year, but we got to come ready to play,” Thomas said.

“I think, defensively we have to play with a little sense of urgency. Offensively we are getting a little better every day. You can tell we are getting out of a “learning phase” and moving to more of a “reaction phase” and that’s good because we’re not thinking as much. We’re starting to get a grasp on all the concepts of the passing and running game.

Thomas said keys to the matchup is not giving Hillcrest anything and finishing drives in the red zone.

“That was one thing against Opp when we moved the ball a couple of times, even when we didn’t turn the ball over,” Thomas said. “We moved the ball to (the red zone) and it stalled and we didn’t get points out of it. So we got to score when we have drives go that deep.”

Thomas said the team is in good shape health wise and that Friday’s game on the road will be a good test on his team’s composure.

“I feel good about what we’re doing,” Thomas said. “We’re going into a hostile environment. We got a lot of kids, which last week was the third time they stepped on a field as major contributors, so now we’re going on the road. We’ll see how we handle that pressure. Again, taking care of the ball is important. We didn’t have any false starts on the offensive side last week. We showed great composure up front. On defense, we got to do what we’re supposed to do. The kids are playing hard and pursuing the ball. We just have some technique things that can be fixed and that’s what we’ve been addressing this week. I think if we do that we’ll be fine.”

A standout player to watch for Miller has been running back Demarquis McMillan who has rushed for a combined 365 yards and three touchdowns in two games this season.

Weather forecast for Friday is for clear skies, light wind with a low of 68 degrees Fahrenheit. Kickoff is at 7 p.m.

So far the W.S. Neal Eagles (0-2) have had its stroke of bad luck this season. The team has lost five key players due to injury, with its most recent being star player Jacobey Hawthorne. Hawthorne suffered an injury at the beginning of the third quarter against No. 8 ranked Thomasville last week. All five injured players are out indefinitely with hopes of returning late in the season.

Hawthorne’s absence will leave a gaping hole in multiple positions, including the quarterback position where junior Christian Wood, who was originally the third team quarterback, looks to take over. No. 52 P.J. Lovelace will serve as place kicker and the versatile Marvin Maddox will take over punting duties.

Hoehn said he is extremely proud of the way his team has competed so far, despite some of the early season setbacks.

“We have played two of the better 4A teams in the state of Alabama,” Hoehn said. “We’ve played those two teams down to the last seconds of the game and we’re doing that with a lot of missing pieces. They’re working really hard. We feel the young kids are going to get better every week. This week is a big game.”

Satsuma (1-1) is coming off a bye week before losing to 2A, No. 9 ranked Leroy. The Gators have outscored its opponents 67-40. Head-to-head Neal is 2-0 versus Satsuma. Hoehn said every season Satsuma has shown signs of improvement.

“(Satsuma) has a very good quarterback (Andrew Barefoot). They have a good tight-end, a couple of good receivers, a good tailback and a big offensive line. They have a solid kicking game as well. We realize all of this. We have confidence in the way our kids compete. That’s all we can ask them to do.”

Hoehn said success this Friday will come down to a few key things for the Eagles.

“Ball security. Limit penalties. See improvement in our young players,” he said. “If we don’t respect (Satsuma) running the ball they’ll hurt us, so we have to play them honest.”

A player to watch for the Eagles has been the shifty Maddox, who leads the team on offense with 333 rushing yards and five touchdowns through two games.

Weather forecast for Friday is for mostly clear skies, with a light wind and low of 71 degrees Fahrenheit. Kickoff is at 7 p.m.