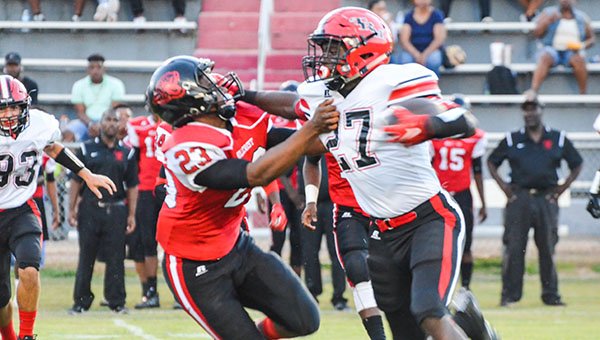 Corey Williams | The Brewton Standard
No. 27 Joshua Jolly of TRM stiff arms a Hillcrest defender on his way to the end zone for a 75-yard kick return for the touchdown.

The T.R. Miller Tigers defeated the Hillcrest-Evergreen Jaguars 38-13 Friday to improve to 2-1 for the season, and 2-0 in region standings.

Miller didn’t waste any time jumping on the scoreboard. On the beginning kick off of the game, Miller’s Joshua Jolly received the ball on the Tigers’ 25-yard line. Jolly bounced to the outside, delivering a stiff arm to a Jaguar defender before turning it up the side line for a 75-yard return for the touchdown. Kicker Matthew Morgan added the PAT to put Miller ahead, 7-0.

Less than five minutes later Miller scored again, this time with a 21-yard run up the middle by junior DeMarquis McMillan.

With 2:33 to go in the first quarter, Hillcrest responded with a score through the air when quarterback Ryan Nettles connected with junior Kobe Bradley for a 19-yard touchdown. Kicker Tyrese Lopez added the PAT, to make the score 14-7 in favor of Miller.

With 52 seconds left to play in the first quarter things took a turn for the worse for the Tigers. McMillan took the handoff on a design run to the outside. With some room to operate, McMillan sped to the outside but as he readied for an oncoming Hillcrest defender his right knee seemed to give out. The Tiger’s leading rusher fell to the ground in agony. McMillan would leave the game and not return.

Just a minute into the second quarter, TRM quarterback Caleb Winton took a quarterback sneak in for a two-yard touchdown. Morgan added the PAT, to give the Tigers a 21-7 lead.

The Tigers’ special teams made another big play. This time on a punt return. Senior Jo Jo Booker received the Hillcrest punt in Tiger territory. Booker dodged Hillcrest defenders and took the pigskin all the way for a 61-yard touchdown. After the PAT, Miller led 28-7.

At 8:24 to play in the second quarter, Nettles connected with junior wide receiver Joshua Jackson for a leaping soup catch over a Tiger defender for a 20-yard touchdown. Miller blocked the PAT, making the score 28-13.

With 4:45 to go in the first half, junior Michael Campbell bulldozed his way in the end zone for a one-yard run. Morgan added his fifth PAT for the night to extend the Tiger lead, 35-13.

Morgan added a 32-yard field goal in the third quarter to make the score 38-13, the final for the game.

Leading Miller was Booker, who was tenacious on defense with three interceptions and four tackles, including a monster hit near the Tiger end zone as the Jaguars were threatening to score. On special teams he had the 61 yard return for the touchdown.

Campbell had 10 carries for 47 yards and a touchdown.

TRM head coach Andrew Thomas said he is proud the way his team came out to play.

“Hillcrest played with some tempo, which we weren’t quite prepared for early in the game,” Thomas said. “We kind of gathered ourselves even though they moved the ball. I thought we played pretty well. There’s somethings we still have to work on, but we definitely got better this week. We’re going to evaluate some areas to get better. They gashed us in a few areas on us just not doing what we’re supposed to do. So we’ll continue to work. The big thing is our kids kept battling all night, because when Hillcrest got something we’d make a play right behind it. The kids showed a lot of heart. “

Leading Hillcrest was Mikyle Dees with 16 carries for 107 yards on the ground.

Nettles was 12-24 passing for 134 yards, two touchdowns and three interceptions. The Jaguars had 234 total yards. Miller had 319 total yards.

Thomas said the offense found a groove in the first half and that the performance by the special teams was huge in the victory.

“A lot of the plays we ran tonight we checked at the line of scrimmage,” Thomas said. “Whether it was the quarterback on his own or it was coming from a sideline check. Our kids did a good job sitting in there hearing the call and executing it. We forced (Hillcrest) in formations when they didn’t line up right and we took advantage of it. That’s kind of our game.”

Thomas said he was proud of how physical the team played.

“That was a positive,” Thomas said. “That’s what I’m trying to preach, being physical. Of course DeMarquis (McMillan) going down hurts us, but we’ll have to live off of that. We’re going to have to be more sound.”

McMillan had nine carries for 72 yards and a touchdown before exiting the game with an injury. His status will be updated at a later date.