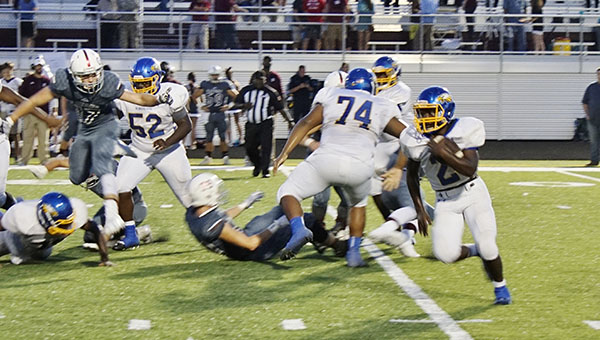 Heather Stone | The Brewton Standard
De’Ron Smith rushes against Satsuma. Smith rushed for 52 yards and a touchdown for the game.

SATSUMA–Despite a tremendous effort on the road Friday, the injury-plagued W.S. Neal Eagles fell to the Satsuma Gators 29-12. The loss drops the Eagles to 0-2 in the region and 0-3 overall.

Coach Doug Hoehn said, “I’m proud of the kids’ effort. They played extremely hard. I think the difference in the game was when we had two turnovers going down there to score. We actually should have had [another score] at halftime, but we fumbled the ball down there.

“Satsuma’s a good football team this year, and I think the difference in that game was a couple of our penalties and a couple of our turnovers, but it wasn’t because of a lack of effort.”

Neal received the ball to start the game, but was forced to punt. Satsuma came out strong, ending a three-play drive with a 40-yard touchdown pass from sophomore John Walley to senior Anthony Springfield. The PAT was good, and Satsuma took an early 7-0 lead with 7:54 on the clock in the first quarter.

The Eagles started a promising drive, making a couple of quick first downs, before having to punt the ball again on a fourth and 13. Satsuma’s second possession led to the Gator’s second score when a six-play drive ended with a 54-yard touchdown pass from quarterback Andrew Barfoot to sophomore Zachary Mixon. A good PAT put the Gators up 14-0 with 1:39 left to play in the first quarter.

Neal took possession of the ball on their own 21-yard line and immediately showed the Gators that they had come to play when sophomore Marvin Maddox broke free for a 34-yard race down the field. This started a drive that ended with senior De’Ron Smith sprinting 16 yards into the end zone to put the Eagles on the board at 14-6 with 8:24 to go in the second quarter.

On the first play of the next series, Sophomore Ricky Samuel sacked Gator Barfoot for an 8-yard loss. Looking at a second down and 18, the Gators took to the air, completing a couple of passes to put them at fourth down and two. They went for it on the ground and were denied by the Eagle defense.

The Eagles took over on downs at Satsuma’s 47-yard line, and Maddox ground out another 41-yard run, getting the ball to the Gator 6-yard line. An unfortunate fumble on the next play was recovered by Satsuma’s Christopher Lee, giving the Gators the ball deep in their own territory. Unable to score, the Gators punted the ball, and the Eagles took over on their own 16-yard line. They were driving down the field and had made three first downs when the clock ran out to end the half.

After stopping the Eagles on fourth down, the Gators were able to convert its second possession of the third quarter into points with a little trickery, using the flea flicker. Barfoot handed off to senior Nicholas Kritner, who then tossed the ball to senior Luke Montalvo, who was able to take it in for an 11-yard touchdown. The kick was good, and the Gators increased their lead to 21-6 with 23.9 seconds left in the third quarter.

Not to be outdone, the Eagles answered right back, needing only three plays to finish their next drive with a 57-yard dash across the goal-line by Maddox. The two-point conversion failed, but the Eagles closed the gap to 21-12, with 11:26 left in the game.

Satsuma’s next possession also led to a touchdown on an 11-yard pass from Barfoot to senior Peyton Reed. The two-point conversion was good, giving the Gators a 29-12 lead. This would be the last score of the game.

Neal’s next possession resulted in a fumble that was recovered by Satsuma’s Springfield. Then Neal’s defense forced another three-and-out, thanks to Ricky Samuel tackling a runner for a five-yard loss, and leaving the Gators facing fourth and 14.

Neal had the last possession of the game and fought hard, driving down the field from their own 29-yard line to Satsuma’s 20-yard line in only five plays, but the clock ran out before the Eagles could score.

Neal will play Calhoun County at home on Friday night for Homecoming. Kickoff is at 7:00 p.m.