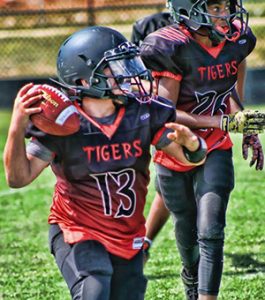 Courtesy photo
No. 13 Caleb Kent gets ready to throw with No. 26 Jashaun Williams looking on.

Leading the Sophomores was R.J. Smith with 10 carries for 44 yards; and Aiden McCall with four tackles on defense.