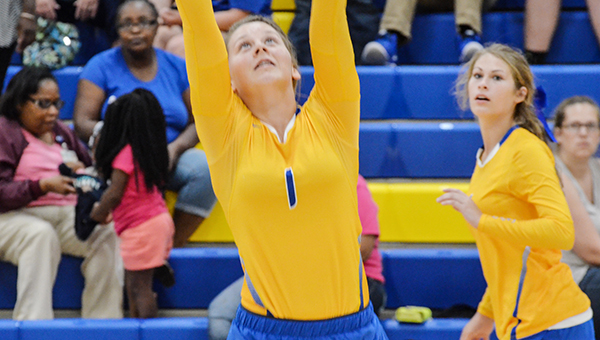 Corey Williams | The Brewton Standard
Neal’s Tori Gillam sets up a teammate while another teammate, Alexis McNew, looks on.

The W.S. Neal Eagles varsity volleyball team had an impressive performance this past Thursday as it defeated Escambia County in four sets to win its fifth match of the season. Neal won sets one and two, 29-25 and 25-20, respectively; lost set three, 17-25; and dominated set four, 25-8.

“Escambia (County) is extremely athletic and receive the serve very well,” said Neal coach Jason Blaney. “I do not believe we played Eagle volleyball until the end, but even with that being said we were able to win the first two sets then the fourth for a big area win. We need to continue working on our level of play and not letting up.”

The entire Eagles volleyball team will play a home match against Monroe County today, Sept. 15. Middle school will play at 4 p.m., followed by JV at 5 p.m. and varsity at 6 p.m.