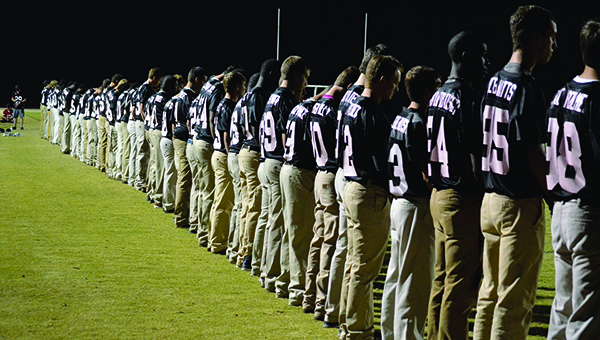 Editor’s Note: This column is written about the upcoming T.R. Miller Legacy Game, which will be held on Fri., Oct. 7, at homecoming.

Playing football is one of the hardest things a young man our age can do, but the battle on the field is nothing like the battle other people have to face on a daily basis. Everyone plays this game for a reason. Some people play for themselves, while some people play because their family encourages them to, but nevertheless, the mindset you bring into the game as a T.R. Miller football player is to win for our school, city, and family.

But in this particular game, it is not about winning or losing, it’s about what the game represents. We always play for the name on the back of our jerseys.

Usually it says T.R. Miller, but in this game it is much more than that. The Legacy Game allows each player to represent someone who has been affected by cancer by wearing his or her name on our back.

When we put that name on our back and our helmet on our head for this game the atmosphere is not the same. It was a sentimental moment for others to see their loved ones being represented by a group of young men who were playing this game for them. On the field we could feel a connection to the crowd that we have never felt before. The emotion and energy was not one of winning or losing because we had already won this game.

By representing those names on our jersey there was an unexplainable feeling that rose up in us of pride, joy, and accomplishment because we had done something much greater than us. When we gave those jerseys away after a game we weren’t just handing over a piece of cloth, we were passing on hope that this is a battle that can be won and is being fought everyday. We hope that this Legacy Game is a tradition that many more T.R. Miller Tigers will be able to feel because you can’t find this feeling anywhere else but in Brewton.