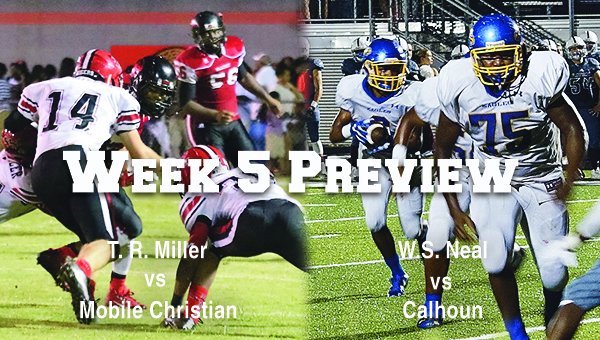 Eagles eyeing win, get a player back

Calhoun is coming off a 54-0 loss against Central Hayneville. This season Calhoun has been outscored by opponents, 24-207.

A win is what the Eagles are after, and what better time than during the school’s annual Homecoming Week.

“We always have a large crowd for homecoming,” Hoehn said. “We have a lot of former students that come back. The administration and the teachers do a good job all week long with school spirit and building the floats.”

Hoehn said with the fun, his players recognize there still is a game to play, which is the team’s major focus.

“Our job is to concentrate on the game,” he said. “Homecoming is always better if you win the football game, and our kids understand that. That’s our job. Folks in the community get involved in homecoming pregame and halftime festivities. Our kids have a chance to enjoy that to an extent throughout the week for stuff going on for students. And they’ll enjoy that after the game. The kids understand it’s our job to win the game so everyone can have a good time.”

Taking care of the football and reducing penalties are again keys to give the Eagles a chance to win the ballgame, said Hoehn.

The Eagles currently have numerous key injuries that affect both sides of the ball, but things may be looking up. Junior Matt Hutchins will make his return to the team this week on a limited basis after getting injured earlier in the season.

Hoehn said Hutchins will get a few reps on the offensive side at quarterback. If all goes well, Hutchins will make a full return the following week versus Carroll. At the start of the season Hutchins was listed as a starter in the secondary on defense and at wide receiver on offense, as well as the backup quarterback to the now injured Jacobey Hawthorne.

Weather forecast is set for a clear night with temperatures around 78 degrees Fahrenheit. Kickoff in East Brewton is at 7 p.m.

The No. 5 ranked T.R. Miller Tigers (2-1) will face the No. 7 ranked Mobile Christian Leopards (2-1) this week at home for a chance atop the 3A Region 1 standings. Both sit at 2-0 with Mobile Christian coming off a big 34-12 win over Bayside Academy, and Miller coming of a redeeming 38-13 win over Hillcrest.

So far this young season, the Leopards have made a successful transition from 2A to 3A.

Mobile Christian junior tailback and Arizona commit Troy Young and senior Jordan Graddy have been the team’s leading rushers. Young is averaging 101 yards per game this season, though was limited to action due to cramps last week against Bayside. Graddy gave his team the go-ahead lead on a 52-yard punt return against Bayside. The Leopards never relinquished the lead after. Graddy also had 10 carries for 90 yards and a touchdown in the win.

Quarterback Cameron Horn had a big game against Bayside as well, completing 73 percent of his passes for 120 yards and three touchdowns. This season the Leopards are outscoring opponents 120-32.

Miller’s defense showed promise last week against Hillcrest, holding the Jaguars to 234 yards total. Particularly having its best game of the season was the secondary, which had three takeaways. Special teams performed well with touchdowns on kickoff and punt return. Matthew Morgan was 5-for-5 in PATs and nailed a 32-yard field goal, and the punting game netted 40 yards per punt, making the opponent drive the length of the field.

Miller will be without its leading rusher DeMarquis McMillan for this game and for the foreseeable future, after McMillan went down with a devastating leg injury against Hillcrest. Michael Campbell and Darius Williams will look to handle some of the carries.

It’ll be a battle of defenses on Friday when both teams square off. Field position will be key.

TRM and Mobile Chrisitan have never faced each other prior to Friday.

Weather forecast is set for partly cloudy with a temperature of 82 degrees Fahrenheit. Kickoff in Brewton is at 7 p.m.