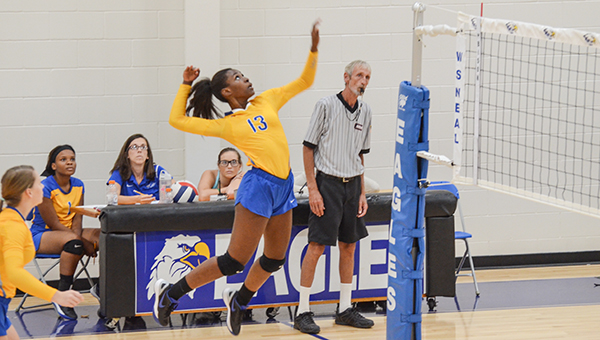 Corey Williams | The Brewton Standard
Dinah Samuel of Neal goes up for the kill against Monroe on Thursday.

In the first set Neal made some good plays at the net with some nice saves off some diving plays to the floor.

In the second set, Erin Salter led the Lady Eagles with six points off the serve. Monroe battled late in the set, trailing 24-10, but a soft return by Dinah Samuel sealed the win for Neal.

The third set was competitive, with both teams drawing even six times. Perhaps the play of the set was by Anijah Stewart who made a diving returning volley that found room in the Monroe County defense for the point. The play led to a 7-3 run by Neal, with Marishia Fraser closing out the game with a spike at the net.