Neal caps off homecoming with 54-0 win over Calhoun 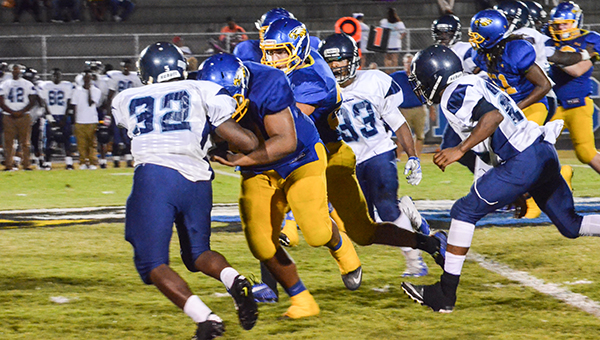 Corey Williams | The Brewton Standard
Neal running back Zachary Baxter gets a lead block by Josh McMillan on Friday.

The W.S. Neal Eagles closed off its annual homecoming night triumphantly with a 54-0 victory over Calhoun Friday.

The Eagles scored four touchdowns before the four minute mark in the first quarter; first off a 60-yard run by Marvin Maddox; then an eight yard run by Jeremiya Mitchell; then a four-yard run by Peyton Salter; which was followed by a 50-yard catch down the sideline by Brahjon Taylor from quarterback Matt Hutchins.

The Eagles kept up the scoring at the start of the second quarter when quarterback Christian Wood connected with Aquarius Taylor for a 19-yard touchdown. With 4:50 to go in the second, Salter scored on a 14-yard reception by another Eagle quarterback, freshman Jennings Hobbs, to make the score 38-0 at halftime.

Neal added two more touchdowns in the fourth quarter on a three yard run by Amon Craig and a nine-yard carry by freshman Ezekiel Smith.

In total, seven different players scored for the Eagles.

WSN head coach Doug Hoehn said he’s happy to get a win for the community.

“Homecoming is important around here,” Hoehn said. “The community does a great job supporting this team. It’s good to get a win. Hopefully we get some of our other injured kids back down the road and just get better every week.”

In his limited return on the field after an injury earlier in the season, Hutchins was 2-for-2 in passing for 58 yards and a touchdown.

Hoehn said he like what he saw from his quarterbacks in the game.

“It’s good to have (Hutchins) back,” he said. “He’ll be back playing for us next week as far as the quarterback position. That’s big. Christian Woods has improved a lot for us. We put him in a position last week that he’s never been in before. I thought he improved a lot tonight.”