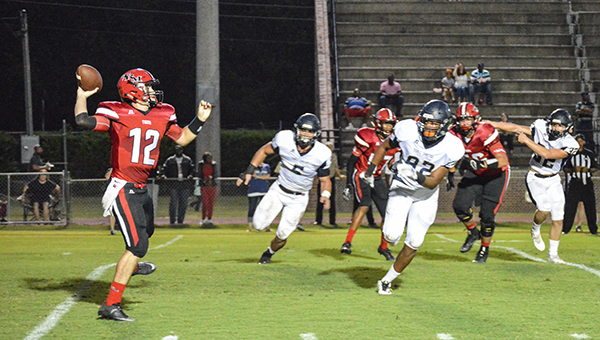 Miller found itself in a hole down 14-0 at the end of the first quarter. The Tigers finally got on the board in the second quarter when kicker Matthew Morgan connected for a 33-yard field goal to make the score 14-3.

In the third quarter Miller inched closer to Mobile Christian when quarterback Caleb Winton connected with Tyrese Nicholson for an eight yard pass in the end zone. The Tigers failed on the two-point conversion. Mobile Christian led 14-9.

Mobile Christian answered in a big way on the ensuring kickoff with a 90-yard return by senior Jordan Graddy for the touchdown. With the added PAT, Mobile Christian led 21-9.

In the fourth quarter, Miller responded with a touchdown of its own when running back Michael Campbell barreled in the end zone for a two-yard touchdown run. Morgan added the PAT, making the score 21-16 in favor of Mobile Christian. The Leopards added more pressure to the Tigers when it added another touchdown on a 67-yard pass. The PAT was no good giving Mobile Christian a 27-16 lead.

The Leopards perhaps had the game won with the Tigers facing a fourth and 22 with 6:19 left to play in the game. Winton dropped back to pass, but the Leopard defense was able to get the sack. But on the great defensive play Winton’s facemask was grabbed for a 15-yard penalty. The penalty put the Tigers in field goal range for Morgan, who showed he had the golden leg with a clutch 32-yard field goal to keep the Tigers alive.

Leading 21-19, Mobile Christian was forced to punt after a Tiger defensive stand. The Tigers took over on its own 25-yard line with 1:10 left to play. Winton connected with Jo Jo Booker for two quick passes, good enough to move the chains. After another pass and two running plays, Miller found itself in another fourth and long situation. Winton rolled out to his right to find a player downfield but was met by a Leopard defender while throwing. His throw fell incomplete. The Leopards took over on downs, and took a knee on offense to seal the region victory.

TRM head coach Andrew Thomas said the mishaps were crucial in making things tough for the Tigers in the game, but still his team fought with a chance to win in the end.

“It’s disappointing,” Thomas said. “The kids fought hard. I think defensively we played really well. I like we’re getting more physical as a team. (Mobile Christian) busted that play on us during the second half. Other than that we shut the run game down. We played with a lot of heart, but I think we beat ourselves. We played a good team and you just can’t make that many mistakes.”