Miller volleyball loses in semifinals to Cottage Hill in tourney 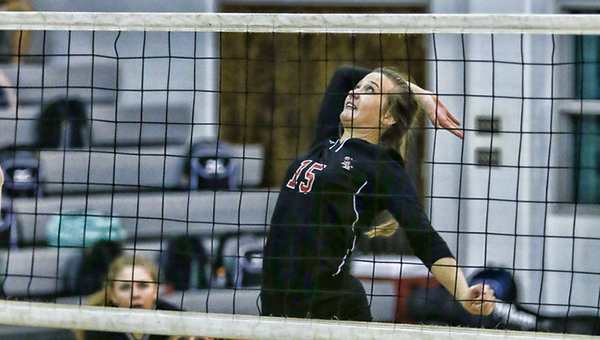 The T.R. Miller Lady Tiger volleyball team competed in a tournament in Saraland this past weekend against Daphne, Mary G. Montgomery and Mobile Christian in pool play, before competing against UMS-Wright and Cottage Hill in single elimination games. Miller lost to Daphne before defeating Mary G. Montgomery and Mobile Christian. TRM defeated UMS-Wright 2-0 and lost to Cottage Hill in the semifinals 1-2.

Leading the team was Mallori Floyd with 11 digs and 4 kills; Allie Nelson with 13 digs, 2 ace serves and 4 kills; Steely Ruzic with 9 digs; and Hannah Lisenby with 6 kills.

Leading the team was Allie Nelson with 6 aces and 10 digs; Grace Ruzic 5 kills; and Mallori Floyd 11 digs and 3 kills; Madison Douglas; and Steely Ruzic with 5 kills.

Leading the team was Allie Nelson with 8 kills.

“There was some good volleyball on both sides of the net,” said coach Terri Lynne Peacock. “We did a great job playing together as a team and staying focused. We knew how important it was to play in the lead and not have to fight from behind. I was proud of the intensity we carried throughout the tournament.”

The varsity is 3-0 in the area. Senior Taylor Austin led the teams with 11 kills.