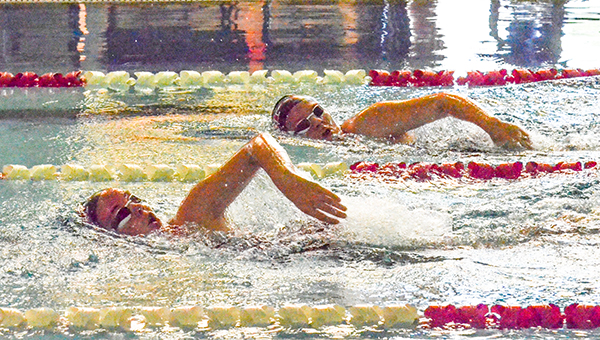 The T.R. Miller Tigers swim team opened its swim season with a home meet this past Saturday with a win against the visiting teams of Saraland and Prattville Christian Academy.

The Tigers as a team had a combined total of 1,245 points to Prattville Christians 623 and Saraland’s 218. Cole Jernigan had an amazing meet, dropping times all over the heat sheet, and earning sectional cuts. Jernigan took first place in the men’s 200 freestyle, 50 freestyle, the backside 100 freestyle, 100 backstroke and 100 breaststroke.

“(Jernigan) is a determined, hardworking young man who has a bright future in the sport of swimming,” said swim coach Angel Boyd.

“(Baxter) has an extremely good butterfly, and breaststroke, but his new focus has him shining in every event,” Boyd said.

“(Thelen), who is also a young seventh grader, is a swimmer that has worked very hard to earn his place on this team, and I am very proud of his efforts,” Boyd said.

Nolan Atkinson took first place in the front side of the 100 freesyle, earning a sectional cut, second in the 50 freestyle swimming a personal best, 27.43; and third place behind his teammates (Jernigan) and (Baxter) in the 200 freestyle and 100 backstroke. He also swam a personal best in the 100 breaststroke placing fourth overall in the event.

“Guthrie is a hardworking, focused young man, who adds leadership and maturity to our team,” Boyd said.

Sara Scott swam personal best times in almost every event she entered. Scott placed third in the 100 breaststroke and 200 freestyle, along with second in the100 backstroke and 50 freestyle. Scott also cut a sectional time in the 50 freestyle, swimming a 29.97.

Tenth grader Tiffany Reiss swam a great meet, collecting a second place finish in the 100 fly, fifth in the 200 IM, fourth in the 100 backstroke and eighth in the 100 breaststroke.

Jocelyn Carpenter, who recently recovered from an Achilles tendon injury, finished fourth in the 200 freestyle, sixth in the 50 freestyle, third in the 100 backstroke and seventh in the 100 breaststroke.

The Tigers are coached by Angel Boyd and Lisa Atkinson. The team will be in action again Oct. 18 in Fairhope.