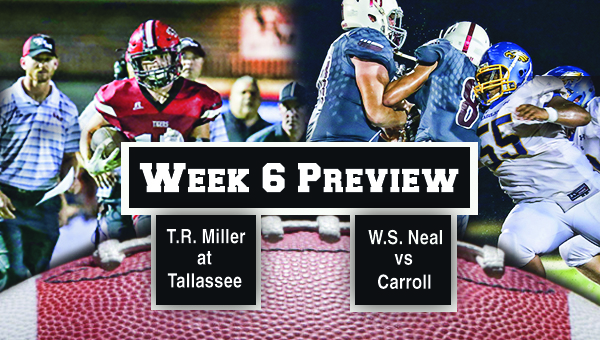 Miller looks to bounce back in tough road game

Miller is coming off a 29-17 loss to Class 3A, No. 6-ranked Mobile Christian. Opponents are averaging 16 points against Tallassee. Miller is averaging 33 points per game.

“(Tallassee) tries to run they’re quarterback (No. 18, Casey Baynes) a lot,” Thomas said. “(Baynes) is a good football player. They are really three offenses in one. They run the spread. Then they’ll run the Pro I, and they’ll run the old school box where they’ll run some misdirection. They make it tough to prepare because they run a mix of things that you kind of have to break your defense down into a mix of segments. It can be a lot on your kids understanding, making sure we’re in the right checks and lined up the right way.”

The team will be without its leading rusher DeMarquis McMillan in the second half of the season. As far as the extent of his leg injury suffered against Hillcrest in Week 4, it is unknown at this time. He will likely miss the rest of the season. McMillan rushed for 441 yards for four touchdowns before the injury.

Moving forward Miller will have to improve on limiting big plays from the opponent. Though limiting Mobile Christian to only 200 yards of total offense last week, Miller was gashed for a 90-yard kickoff return and 67-yard pass for a touchdown on defense.

Weather forecast in Tallassee is expected to be partly cloudy skies and light wind, with a low near 70 degrees Fahrenheit. Kickoff is at 7 p.m.

Neal to face toughest test yet

Neal head coach Doug Hoehn said Carroll will be the best football team they will have seen so far this year.

“(Carroll) has three very good running backs (No. 1, C.J. Roberts; No.2, Martin Mazue; and No. 3 Markel Lewis). They have a very talented quarterback (Alex Reeves, also plays defensive back). “They all also play defense. Their coaches do a good job keeping them on the field.”

Roberts, a senior this year, was all over the field last week against Eufala. Roberts had 21 tackles at defensive end and rushed for over 100 yards at running back.

Hoehn said Carroll’s offensive and defensive lines are a talented group too.

“They’re very physical up front,” he said. “Both lines do a good job coming off the ball. They’re use to playing one-way up front, so their players stay fresh.”

Carroll’s skill players are real athletic and the coaches do a good job keeping players fresh which will be a test, Hoehn said.

“Those same skill players also play special teams and they do a good job there as well,” he said.

In injury news, quarterback and defensive back Matt Hutchins will make a full return to the team. Last week, Hutchins returned to limited play after an injury earlier in the season to throw a 50-yard touchdown.

“We get (Hutchins) back,” Hoehn said. “We still have five (players) out. Right now those five are out indefinitely.”

Weather forecast is expected to be partly cloudy with a temperature of 82 degrees Fahrenheit. Kickoff in East Brewton is at 7 p.m.