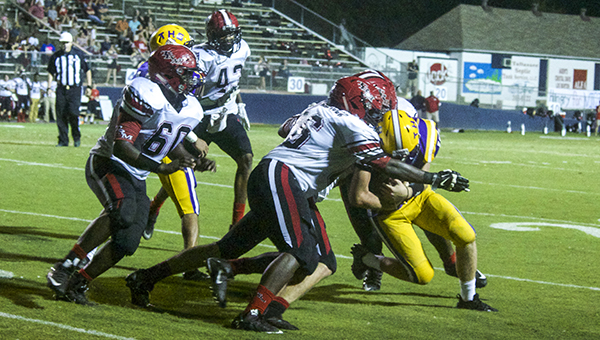 It may not be known what the Tallassee football team ate at its pregame meal Friday night before its clash with T.R. Miller, but one thing was for sure when the night ended:

Tallassee had its fill of Soup.

As Campbell was highlighting an offense that rushed for 290 yards, an injury depleted defense gutted out four quarters of inspired play and didn’t give up until a last-ditch Tallassee pass on fourth down was stopped on the T.R. Miller 4-yard line just inches short of the first down.

“I couldn’t be more proud of the effort and heart these boys are playing with,” said first year TRM coach Andrew Thomas. “We played extremely hard tonight and found a way to win the game.

“We are progressing each week,” he continued. “We still have some areas where we have to clean up and address, but ultimately these guys are playing T.R. Miller football and I’m proud of the effort.”

After Tallassee took a 6-0 early lead, T.R. Miller overcame the deficit with a pair of touchdowns within a three-minute span. Both were set up by turnovers and both were capped by Campbell touchdown runs.

On the first, Tyrese Nicholson stepped in front of a Tallassee pass and got the interception. The Tigers took exactly one play to capitalize when Campbell took the pitch from senior quarterback Caleb Winton on the option, broke two tackles and sprinted 40 yards to the end zone. Freshman place kicker Matthew Morgan made the first of four PAT kicks and the Tigers led 7-6.

After the ensuing kick, Tallassee fumbled a handoff and senior JoJo Booker pounced on the ball at the Tallassee 40. Winton hit Henry Davison with a 15-yard pass on first down. After a 20-yard run by Campbell, the Soup was flowing again as he finished the drive off with a 6-yard run with 6:55 to go in the half to make it 14-6.

Tallassee countered with a touchdown and two-point conversion with about five minutes left in the half to tie the game at 14-all, then when Tallassee failed on a 4th-and-22 pass attempt with 32 seconds left in the half, T.R. Miller’s offense went back to work.

On its first play, Winton connected with Booker, who outjumped two defenders down the right sideline, for a 36-yard gain to the Tallassee 28.

On the very next play, the two connected again in the left flat, where Booker stiff-armed one defender and outran the other to the pylon for the touchdown in the final seconds of the half to give the Tigers a 20-14 lead.

Miller set the tone for the second half by taking the kickoff to start the third quarter and engineered a 4-play, 70-yard scoring drive that was capped off with a Kristian Smith 30-yard burst right up the middle to make it 27-14.

Tallassee wouldn’t go away and cut the lead to 27-21 on a quarterback keeper.

Winton answered his Tallassee counterpart with 4:02 left in the third quarter. After taking the kickoff at the TRM 40, the Tigers put together a 7-play, 60-yard drive to the end zone. The drive  included the Tigers converting a pair of third-down opportunities and a 14-yard run by Campbell before Winton kept the ball on the veer option and took it 14 yards for what proved to be the game-clinching touchdown.

Then it was time for the defense to finish the job. Despite Tallassee hammering away at them with a grueling 11-play, 67-yard drive, TRM got it to fourth down.

With the deciding play, Tallassee threw a short pass that was caught at the Tiger 4-yard line, but when measured the ball was just inches short of the first down and TRM was able to run the final minute off the clock for the win.

The Tigers, now 3-2 on the year, return to Class 3A, Region 1 play this week when it travels to Excel.