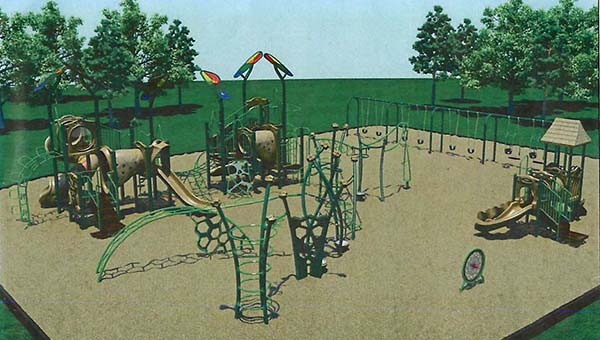 This conceptual drawing shows the layout of the new equipment at Dogwood Hills Park.

Brewton’s park system is growing and changing by leaps and bounds.

Monday, the council announced two measures that are likely to thrill local residents – new equipment at the Rainbow Dragon Park at Dogwood Hills and a finalized agreement between the city and Jefferson Davis Community College to encompass more than 80 acres of college grounds into the city’s park system.

“That equipment is approaching 20 years old,” Lovelace said. “The plastic is gone, and we’ve tried a long time to find funding to replace the whole thing. No parts are reusable.

“With that said, this is the time of the year when playground manufactures give discounts, and it’s a deal that we should take advantage of.”

“But, the manufacturer is offering an almost $47,000 discount, and with that, this seems to be the opportune time to replace the equipment,” he said. “Our total cost is looks like $116,000 to purchase.”

The project will be completed as soon as the equipment arrives.

“Installation shouldn’t take any more than a week I would think,” Lovelace said.

The 10-year renewable agreement with JDCC allows the city to encompass the college’s park, walking track, pond and ball field and golf course areas into the city system.

“We’ve been working on this agreement for a long time,” Mayor Yank Lovelace said. “It’s going to be a real benefit for the city and the college and really enhance our park system around Burnt Corn Creek.”

The agreement does not require the city to perform upkeep on the college’s ball fields; to resurface the tennis courts or redo the bleachers or perform upkeep on any athletic related facility, said city attorney Ed Hines.

As part of the agreement, the city agreed to arrange funding to construct an amphitheater on the property.

• appointed Angela Watson and Ann Marie Sasser to the tree and beautification board;

• approved the city’s 10-day holiday schedule with no changes from last year;

• awarded a $3,000 bid to Pitts Dozier Service to demo the property at 309 East Underwood Street; and,