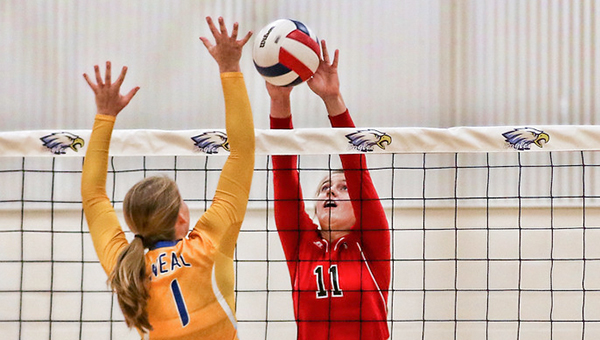 T.R. Miller and W.S. Neal volleyball faced off this past Thursday, with Miller gaining the upperhand to sweep Neal in middle school, JV and varsity matchups.

In varsity action, the Lady Tigers jumped out the gate early in the first set taking a 7-2 commanding lead after a kill by Steely Ruzic. Neal closed the gap to 11-8 on serve points by Cidney Scott and kills by Dinah Samuel and Marishia Fraser. But Miller took back control of the game outscoring Neal 15-5 to win the set.

Miller started set two strong starting the set 4-0 behind kill shots by Allie Nelson. Miller held its game strong with 11 kills in the set to win 25-14.

Set three was the most competitive of the evening between the two teams.

Miller led 14-9 halfway through the set. Neal went on a 3-0 run to make the score 14-12. Miller bounced back with two points to open the game. Miller closed out strong with a couple kills by Mallori Floyd to win 25-19.

Miller improves to 11-5 for the season.

The Lady Eagles are 6-3 for the season.

Earlier in the day the Brewton Middle School defeated WSN Middle School 2-0; 25-13, 25-0. Mackenzie Hoomes served 24 points in a row in the second set.

Both teams will compete against each other tomorrow Sept. 29 at the Brewton Middle School. Matches begin at 4 p.m.