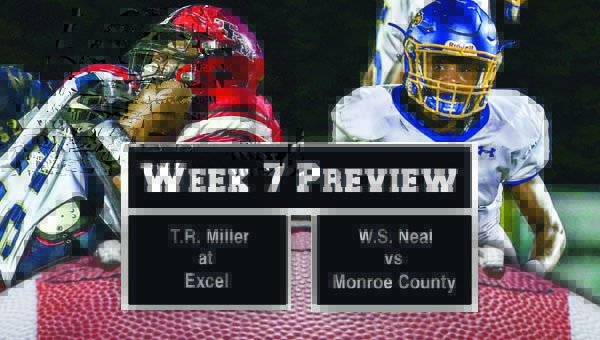 Neal to continue to lean on strength up front

Monroe County is coming off a 32-16 win against Central Hayneville. The Tigers are outscoring opponents 178-151.

“(Monroe County) plays three different players at quarterback,” Hoehn said. “(No. 1, Anthony Jackson) and (No. 3, Liderrian Lee) are their running quarterbacks. [Both of them] have good speed. (No. 9, Je’keviahn Stewart) is mostly their passing quarterback. He has a strong arm and is accurate throwing the ball. We’ll have a game plan set for each one of them. That’s something our kids will have to adjust to, because (Monroe County) will roll one of those players in at any time. They might play all three of them in the same series.”

“(No. 6, Ty’Darius McClain) appears to be the one they go to when they need yardage,” Hoehn said. “(McClain) runs hard. They also have a big fullback. He’s more of a power runner in the inside.”

Defensively, they run to the ball well, Hoehn said.

“They have good team speed. We’re going to have to secure our blocks. They do a pretty good job of pursuing the ball at a good speed in their pursuit lanes.”

Hoehn said W.S. Neal’s strength has been in the trenches up front all season. He expects that to continue.

“I think up front we’ve been playing well all year long,” Hoehn said. “It’s been the strength of our team. No one has pushed us around all year up front.”

Head-to-head the Eagles have had big success against Monroe County posting a 24-14-1 record. Neal has won the past three seasons, with its most recent a 56-20 victory in 2015.

Weather forecast is set at mostly clear skies with a low of 54 degrees Fahrenheit. Kickoff is at 7 p.m. at Tiger Stadium in Monroeville.

Executing early and cleaning up mistakes key for Miller

The Class 3A, No. 9-ranked T.R. Miller Tigers will travel to play in a region matchup against Excel on Friday.

Junior quarterback, No. 1 Ray Ray Maye has been a bright spot for the Panthers this season under first year head coach Jason Wambles.

Maye was 3-for-4 passing with 122 yards and two touchdowns and carried the ball three times for 60 yards and a touchdown before exiting the game with an injury against J.U. Blacksher last week.

“(Maye) is pretty athletic,” said TRM head coach Andrew Thomas. “We got to make sure to tackle him well. He’s a key to their offense.”

TRM is coming off a 34-27 win against Tallassee. Junior Michael Campbell is coming off his best game this season at running back. Senior Jo Jo Booker has been a steady target for senior quarterback Caleb Winton this season. The two seniors will look to connect against the Excel defense. Miller is outscoring opponents 166-124.

Head-to-head the Tigers have dominated Excel with a 6-0 record, outscoring the Panthers 308-33. Miller is 2-0 on the road this season.

“We’ve played pretty well on the road so far this year. Hopefully we can keep that going,” Thomas said. “A team like Excel, they’ve got players like their quarterback that makes them go. He’s the type of kid that can break some plays and get going. In this game they’re underdogs, so you don’t want to keep them around. They’re coming off a win last week, so they’re kids are going to be confident going into Friday. We got to make sure we’re ready to play when we get there.”

Weather forecast is set at clear skies with a low of 54 degrees Fahrenheit. Kickoff is at 7 p.m. at Panther Stadium in Excel.