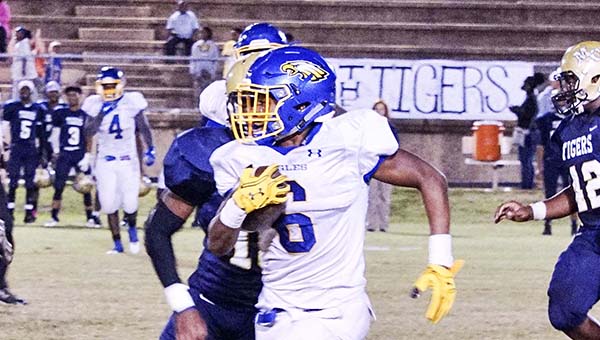 MONROEVILLE–On a crisp, cool night, one of the first that felt like “football weather,” the W.S. Neal Eagles traveled to Monroeville to defeat the Monroe County Tigers 22-18. It was a back-and-forth battle that improved the Eagles to 2-4 for the season and dropped the Tigers to 3-3.

Head coach Doug Hoehn said he was pleased with his team’s improvement this week. “We overcame any mistakes that we made, and I think we played very tough up front. It was hard for them to run the ball on us, and we were successful running the ball on them, so I think up front we played tough, and I think that we saw improvement with some kids that are playing for the first time this year over how they were doing the first half of the season,” he said.

Mistakes that may have cost Coach Hoehn’s young team the game earlier in the year were not insurmountable this week. Hoehn said, “The kids played hard tonight. We lost two games this year, literally, in the last 30 seconds of each game, and we got ourselves into those positions because of some mistakes we made, and we let it affect us so that we didn’t finish out the game. Tonight we had some mistakes, but our kids didn’t let it affect them. They finished out the game like they had to win, so it was a great effort.”

Neal kicked off to Monroe County to start the game, and after both teams were forced to punt once, the Tigers scored first on a 2-yard run by Daylan Packer with 50 seconds left in the first quarter. The two-point conversion failed, and Monroe County took a 6-0 lead.

Then a fast-paced scoring battle broke out just before halftime. With 4:18 on the clock in the second quarter, Neal’s Marvin Maddox broke free of the pack for a 41-yard touchdown run. The Eagles went for two points successfully, and took an 8-6 lead that lasted exactly one minute and 15 seconds.

The Tigers took only two snaps to get a 54-yard pass into the end zone. The two-point conversion attempt failed, but Monroe County still took a 12-8 lead over W.S. Neal with 3:03 left in the second quarter.

Not willing to be outdone, the Eagles also needed only two snaps to answer right back on a 34-yard touchdown run by Maddox, once again taking the lead 14-12 with only 1:41 left in the half.

Neal’s defense prevented Monroe County from gaining a first down, and the Eagles took the 2-point lead into the locker room at halftime.

After one half of play, Neal had 106 rushing and three passing yards on offense for a total of 109 yards. The Eagle defense had held Monroe County to only 49 yards rushing, while the Tigers added 59 yards in the air for a total of 108 yards of offense in the first half.

To begin the second half, Monroe County successfully executed an on-side kick, which they recovered. Neal’s defense stepped up, forcing the Tigers to punt.

The Eagles began a drive on their own 14-yard-line and quickly made it out to their 42, when the quarterback was sacked behind the line of scrimmage. A penalty and another play for a loss of yards had them at 4th down and 22 yards to go. A fumble on the punt gave Monroe County the ball on Neal’s 6 yard-line, first and goal.

From there, Monroe County once again took the lead on a 6-yard rushing touchdown by Packer with 4:46 left in the third quarter. The two-point conversion was no good, but Monroe County pulled ahead 18-14.

Neal answered on their next possession ending a seven-play drive with a 23-yard touchdown run by Jeremiya Mitchell. The two-point conversion was good, giving the Eagles a 22-18 lead with 37 seconds left in the third quarter.

Both teams were held scoreless in the fourth quarter, giving Neal the win by four points.

The Eagles rushed for 113 yards in the second half while holding the Tigers to only 3 yards rushing and 29 yards passing for 32 total yards of offense after halftime.

Overall, Neal had 222 yards of total offense in the win, while holding Monroe County to 140 yards of offense.

Leading rushers for the Eagles were Marvin Maddox with 97 yards on 14 carries and two touchdowns and Jeremiya Mitchell with 93 yards on 12 carries and one touchdown.

Neal plays a region game at UMS Wright this Friday night. Kickoff is at 7 p.m.