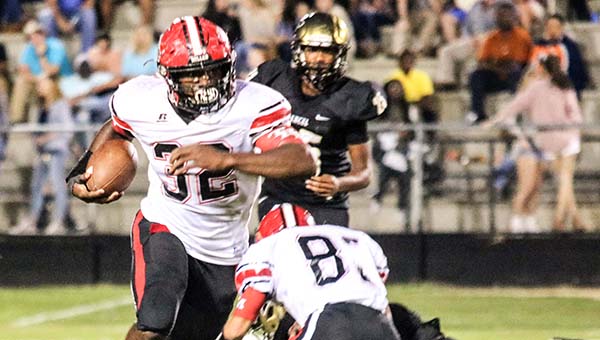 Photo by Allison Terrell
No. 32 Michael Campbell rushes against Excel. Campbell finished the night with 132 rushing yards and 2 TDs.

On the second play of the T.R. Miller Tigers’ first drive of the game, running back Michael Campbell found an opening and broke for a 51-yard touchdown run. From then on the Tigers never looked back in a dominating 41-8 win over regional opponent Excel.

“I think offensively we had our way with what we wanted to do,” Thomas said. “We kind of picked up the blitzes. I think if you look at how we played we were in full control and dominated the game. We made some big plays.”

Following its first touchdown, Miller forced a turnover inside the 15-yard line with an interception by Ty Lett. The Tigers took over on its own 47-yard line, but the offense wasn’t on the field very long. On the first play Campbell continued his good night breaking free for a 53-yard touchdown, only his third carry of the game. The Tigers converted on a 2-point conversion after a missed PAT earlier in the game to lead 14-0.

Later in the second quarter, Miller quarterback Caleb Winton found tight end Hayden Atkinson down the sideline for a 67-yard touchdown. TRM missed the PAT to take a 20-0 lead into the second half.

Miller picked up right where it left off in the third quarter. Winton connected with junior Joshua Jolly in the middle of the field, in which Jolly did the rest with his feet for a 39-yard touchdown reception. Kicker Matthew Morgan added the PAT to increase the Miller lead to 27-0.

Excel found the endzone midway in the third quarter when Tiley Nolan leaped for a 20-yard touchdown in the endzone. The Panthers converted on a 2-pt attempt to make the score 27-8.

Miller was quick to respond with a touchdown on a 44-yard reception from Winton to the shifty Jo Jo Booker for the score. Morgan added the PAT and Miller led 34-8.

The Tigers added a touchdown in fourth quarter when running back Darius Williams busted up the middle for a 5-yard touchdown.

Thomas said overall he thinks his team played well but defensively can better in the secondary.

“I wouldn’t say we had blown coverages. We were not playing our coverages and I think that has to do with experience,” Thomas said. “We have to start playing with our instincts and trusting our eyes. If we can start figuring that end we’ll be fine, because we did do some good things on defense. I’m proud how we hung in there and played our game.”

The Tigers forced five turnovers in the game with three via the fumble and two on interceptions.

The Tigers will face Flomaton (2-4) for homecoming this week. Kick off is at 7 p.m.