A federal escapee was found in Flomaton Sunday.

Chief Deputy Mike Lambert with the Escambia County Sheriff’s Office said Charles Ezekel Cutts was reported as an escapee on Sept. 29 after he failed to report at a halfway house in Mobile. 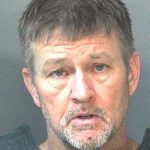 Cutts, who was convicted on a federal firearms charge, was set to serve out the last six months of his sentence at a Mobile facility. When he didn’t arrive, federal authorities issued an escape warrant.

Cutts was found at approximately 9:30 p.m. after callers reported a suspicious vehicle in the Friendship Community. When deputies made contact with the vehicle, the driver refused to stop. Flomaton police officers then joined in the pursuit, which never reached high speeds. The car was finally stopped on Jordan Road in Flomaton and Cutts was taken into custody.

He currently remains in the Escambia County Detention Center under a federal retainer and is awaiting transport to a new federal facility. Other charges could be forthcoming in the incident.