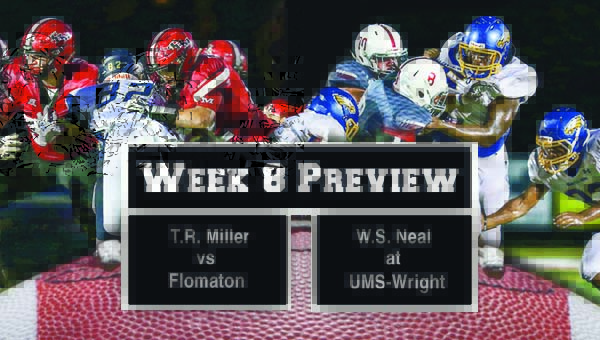 The W.S. Neal Eagles will travel to Erwin S. Cooper Stadium in Mobile to play the Class 4A, No. 1 ranked UMS-Wright Bulldogs this Friday.

The Bulldogs are coming off a 56-0 win over Faith Academy. The win is the team’s fifth in a row, dating back to Aug. 26. The Bulldogs are undefeated in the region at 3-0. They currently are opponents to nine points per game.

Neal is coming off a 22-18 victory over Monroe County. The team is averaging 21 points per game this season.

Field position is always key in football, and one of the big strengths WSN head coach Doug Hoehn listed for the Bulldogs was the special teams.

“(UMS-Wright) has a very good kicking and punting game that helps them out tremendously on field position,” he said.

Hoehn said UMS-Wright has star players at quarterback and running back.

“They have an exceptional quarterback [No. 10, Tanner Allen]. He’ll be the best quarterback we’ve faced this season. He runs and throws the ball well. They have a very capable running back [No. 21 Michael Matthews]. He’s big and physical [5’ll”, 206 pounds] with a lot of speed. He also catches the ball out the backfield. (Matthews) was tough to tackle last year. He’ll be tough to tackle this year. (Allen) was tough to contain last year. He’ll be tough to contain this year. Both of them are capable Division I athletes.”

On defense, the Bulldogs are just as solid, said Hoehn.

“They run to the football well on defense. Their nose guard is a very good football player (No. 55, Daniel Sisson). They’re linebackers do a good job of reading offenses, and they have a lot of speed in their defensive backfield. They’re a solid team in everything they do.”

Last year the Eagles also travelled to Mobile to play the Bulldogs. Neal lost the game 45-21. The Bulldogs lead the overall matchup 9-4.

“(UMS-Wright) seems to be hitting on all cylinders right now,” Hoehn said. “It’s going to be a tough football game. The keys for us are to limit our penalties and turnovers, take care of the ball and to play our assignments. It’s the small things that matter. That’s what determines success.”

Weather forecasts Friday in Mobile are set for clear skies with a low of 68 degrees Fahrenheit. Kick off is at 7 p.m.

The Class 3A, No. 8 ranked T.R. Miller Tigers will host the Flomaton Hurricanes this Friday for its annual homecoming game.

Flomaton is coming of a 29-0 loss to Mobile Christian. The team is currently on a four game losing streak. Opponents are scoring 21 points per game versus the Hurricanes.

The Tigers are coming off its most explosive game on offense this season. In its 41-8 win over Excel, Miller scored on five touchdowns that were 40 yards or more on the ground or through the air. The Tigers are averaging 35 points per game this season.

“We got to take what defenses give us sometimes,” said TRM head coach Andrew Thomas. “We executed well in the passing game last week. We have to keep that momentum. If we do that it’s going to make our run game that much better.”

Thomas said Flomaton is a physical team, which is something he said his defense would have to return to the Hurricane’s offense.

“They want to come off the ball and be physical,” Thomas said. “We got to be physical with their offense. They’re an under the center team. They want to run some option with their quarterback (No. 5 Hayden Hammond). He’s a pretty good player so we have to respect that aspect of their game.”

Thomas said his offense has been in a rhythm dating back to the second quarter of the Tallassee game, and looks for his team to get better with its consistency.

“We’re blocking more consistent. We’re running the ball a lot more physical. Michael Campbell has done a good job these past games. We need to continue to get better with some of the other running backs. They’ll have to carry the load at times because what we require from (Campbell) on defense too.”

Last week the Tiger defense forced five turnovers, four of which were in the red zone.

“That was big for us,” Thomas said. We hung in there. That shows you the kids don’t quit. Even though we’re not necessarily playing as good as we think we can, we’re playing hard in the end. That makes a difference in the outcome of the game because if (Excel) scores it could have been a different ball game.”

“The thing is we’re not letting up,” Thomas continued. “We’re continuing to play.”

Look for the Tigers to get things going on the ground and in the air.

The Tigers lead Flomaton in the overall matchup 29-7-1.

Weather forecasts Friday in Brewton are set for clear skies with a low of 69 degrees Fahrenheit. Pregame ceremonies for homecoming will begin at 6:30 p.m. with a kick off time at 7 p.m.