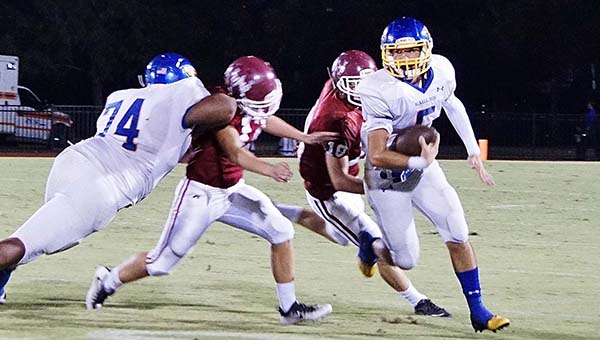 Heather Stone | The Brewton Standard
Neal quarterback No. 5 Matt Hutchins takes off against UMS-Wright on Friday.

MOBILE–W.S. Neal took a 37-0 loss on the road Friday night to the No. 1 ranked 4A team in the state, UMS-Wright. After an uncharacteristically difficult first half, the Eagles slowed the Bulldog offense considerably in the second half and were able to move the ball more, but were not able to convert that into points on the scoreboard.

Coach Hoehn said his team responded to a challenge made at halftime to play harder. “We played a very good football team tonight, and we did not play well at all in the first half. We didn’t play nearly up to our capabilities. When you play a good football team like that, if you don’t play well, you’re going to be down 28-0 at halftime,” Hoehn said. “I thought we played better in the second half. At halftime we challenged them to play better, and they did.”

In the first half, the Eagles allowed 177 yards of offense, 139 rushing and 38 passing, and four touchdowns, two in each quarter, giving the Bulldogs a total of 28 points before halftime. After the half, the Eagles allowed only 81 total yards of offense, 64 rushing and 17 passing. The Bulldogs were only able to manage a field goal in the third quarter and one touchdown in the fourth quarter (PAT no good), for a total of nine points in the second half of the game.

Neal had a total of 125 yards of offense in the game, 94 rushing and 31 passing, to UMS Wright’s 258 total yards. The Eagles covered more ground than the Bulldogs in the second half, with 99 yards to the Bulldog’s 81.