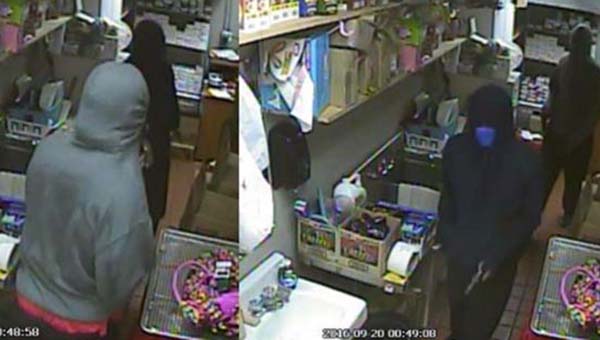 The Flomaton robbers rob the Texaco Station in Flomaton on Sept. 20.

Two armed robbers are still on the loose after robberies at two different Flomaton locations more than a week apart.

Now, the Flomaton Police Department is asking for the public’s help with information regarding these robberies.

Davis said a second robbery on Oct. 5 happened at approximately 1:40 a.m. when two armed subjects entered the Kangaroo Station in Flomaton and held the clerk at gun point. Both subjects were disguised.

The Town of Flomaton has set up an email address for any tips in reference to the robberies or other crimes – crimetips@flomatonal.org. Anyone can also contact the Flomaton Police through its Facebook page or 251-296-5811.

There is a $1,000 reward for information leading to the arrest of these two individuals.

The two suspects are armed and should be considered very dangerous.