A manhunt is underway after an inmate escaped from Atmore’s J.O. Davis Correctional Center Monday.

Jerry Lynn Hilburn, 40, escaped from the center, which is an annex facility of Fountain Correctional Facility, at approximately 5:30 p.m. 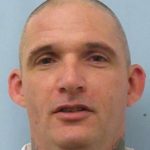 Hilburn was sentenced in September 2013 for possession of a controlled substance, according to the Alabama Department of corrections.

He is described as a white male that is 6-foot, 2-inches tall, 214 pounds, with brown hair and brown eyes. He was last seen wearing his state-issued white prison uniform.

Records show he was three years into a 20-year sentence out of Mobile for possession of controlled substance. He was a minimum in-custody inmate, not work release.

Anyone with information as to Hilburn’s whereabouts or who has information that may lead to his recapture is asked to contact the ADOC at 1-800-831-8825.