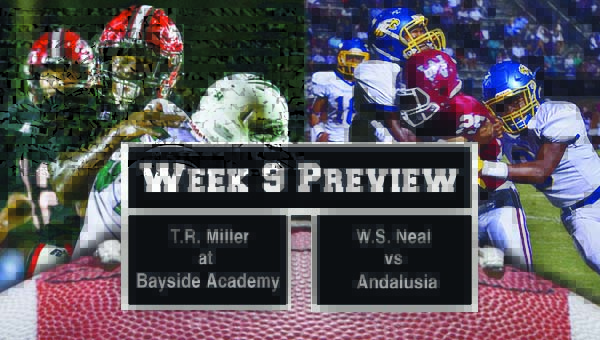 The Class 3A, No. 8-ranked Tigers are facing a big region game on the road versus Class 3A, No. 11-ranked Bayside Academy this Friday. Both teams share the same record overall and in the region (5-2), so far setting a tie for second place in 3A Region 1.

The Admiral defense is surrendering 19 points to opposing teams. The offense is scoring 26 points per game.

“(Bayside) runs a Wing T formation, misdirection, and can run inside and outside the hash marks,” said Thomas. “They’re a disciplined team. On defense they’re scrappy. They play hard and play they’re assignments well. We can’t give them anything. We can’t turn the ball over.”

Thomas said the Tigers have been addressing the little things at practice to try to eliminate mistakes.

“We haven’t been sloppy in our game all the way around,” he said. “Lately it’s just been a bad play here and there. It’s hard to just fix. It’s something game to game you learn and avoid for the future. Decision making is hard to practice. At practice we’ve tried emphasizing the little things so in the grand scheme of things we do our best to eliminate those mistakes. The big thing for us Friday is not giving anything away,” he continued. “I think if we do that we have a very good chance of winning the ball game. If we don’t, then it’s going to be a struggle because (Bayside Academy) is a good team.”

TRM is coming of a 35-21 win over Flomaton. The Tigers are averaging 35 points per game on offense. The defense is holding opponents to 22 points per game.

Junior Michael Campbell has lately been in a groove rushing the ball behind an impressive offensive line. Campbell rushed for 253 yards and three touchdowns last week.

The Tigers are 3-0 on the road this year.

“We’ve seemed to have a better focus on the road this year,” Thomas said. “Our offense has been crisper on the road. We got to do that in Bayside. The same thing with special teams. For them, they’re the type of team that will pull tricks out. They’ll go for it on fourth. They’ll fake it. They’ll onside kick. We got to make sure we’re not taking anything lightly on special teams.”

Whoever wins Friday’s game will take sole possession of second place in the region which will mean home field advantage in the first round of the playoffs.

Weather forecast is set for partly cloudy weather with a low temperature of 62 degrees Fahrenheit. Kick off is in Daphne at 7 p.m.

The W.S. Neal Eagles (2-5) will have to battle another bulldog this Friday as the Class 4A, No. 2-ranked Andalusia Bulldogs (7-1) come into town.

The lone loss by the Bulldogs this season was against current Class 4A, No. 1 ranked UMS-Wright with UMS winning 14-7.

“They have a legitimate dual threat quarterback [No. 9, junior, Ethan Wilson], two good running backs [No. 5, senior, Jamal Hourel; and No. 6, senior, Zack Woods]; and some tall, speed wide receivers [No. 12 , Bridges Anderson; and No. 13, Derrick McQueen].

“Defensively I think their defensive line will be the best we face all year,” Hoehn continued. “They’re big, strong and move well. Andalusia is strong in the punting and kicking game. They’re a solid team. They have more depth this year than last year, which will allow their players to stay fresh. I think they have a very good shot at making a run [for the state title] this year.

Wilson has been the Bulldogs star player on offense this season. The junior has thrown for 1,199 yards with 11 touchdowns and ran for a team-leading 625 yards with five touchdowns.

The already injury-battered team may be without its star player on offense and defense, junior Marvin Maddox. Maddox was injured on a kick off return last week versus UMS-Wright. His status of playing is a game time decision.

Weather forecast is set for clear skies with a low temperature of 58 degrees Fahrenheit. Kick off is in East Brewton at 7 p.m.