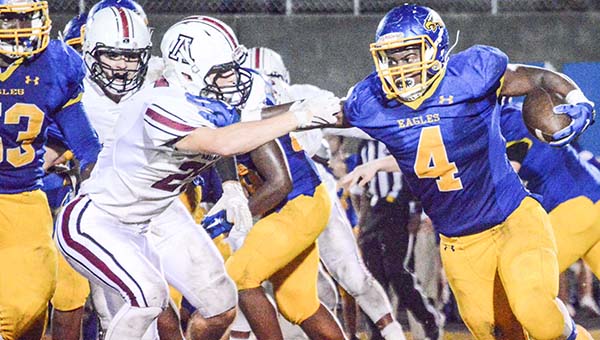 The No. 2-ranked Andalusia Bulldogs picked up a big 35-8 region victory over W.S. Neal Friday night in East Brewton.

“It’s always good to get a win,” Andalusia head coach Trent Taylor said. “W.S. Neal really played a hard game. They were big and strong, and they got after us. I felt like we might have been a little bit off tonight with our quarterbacks and receivers.

“I tell you, this bye week next week couldn’t have come at a better time. We will look at film from the whole season to see what we need to work on, and we will just go from there.”

W.S. Neal got the ball to start the game, but a fumble on the first play of game recovered by Ke’Shun Townsend gave the Bulldogs the ball on the Eagles’ 12-yard line.

The Bulldogs didn’t keep the ball long as they turned the ball over by way of fumble on the first play of the drive.

After W.S. Neal took back over, Will Clark made a big hit in the Eagles’ backfield that helped to force a three-and-out and punt.

Ethan Wilson dropped back to pass on the first play and hit Grant Holley for a 9-yard pick up to start the Bulldog drive.

Zack Woods followed with a 7-yard run to give the Bulldogs a first down.

Andalusia then capped off the short 28-yard drive with a 2-yard touchdown from Antonio Gurley. Kiki Wain’s extra-point gave the Bulldogs a 7-0 lead with 8:44 left in the first quarter.

W.S. Neal couldn’t get anything going on the following drive and Gurley made a stop on the backfield on Christian Wood to force another punt from the Eagles.

Allen George hauled in the punt around midfield and quickly began working his way up field. George got a couple of key blocks and made a couple of players miss on his way to the end zone. Wain’s extra point put Andalusia up 14-0 with 6:27 left in the opening period.

Andalusia’s swarming defense continued to control the game and force another punt following a three-and-out. Townsend and Gurley teamed up to sack Matt Hutchins for a 12-yard loss.

The Bulldogs turned the ball over on the next play with a fumble that W.S. Neal recovered.

The Eagles couldn’t take advantage of the Bulldog turnover and was forced to punt following another three-and-out.

On the Eagles’ next possession, a pass interference call gave W.S. Neal its first first down of the game. However, three plays later the Bulldogs forced another punt.

Wilson picked up a pair of first downs through the air on passes to Holley and B.J. Anderson before hitting Anderson for a 30-yard touchdown.

After forcing another punt from W.S. Neal, the Bulldogs turned the ball over again on fumble. The Eagles’ Jeremiyah Mitchell recovered the ball with 4:59 left before halftime.

The Eagles drove the ball down the field, but a sack from William Lindsey ended the first half with Andalusia leading 21-0.

Both teams exchanged punts to start the second half before Andalusia found the end zone.

Derrick McQueen made a great diving catch on a 31-yard pass from Wilson to set the Bulldogs up on the Eagles’ 22-yard line.

Wilson then tossed a screen out to Holley who shook off the first tackler and then sprinted up the sideline for a 22-yard touchdown. Wain’s extra point gave Andalusia a 28-0 lead with 8:22 left in the third.

Andalusia’s final touchdown of the game came on the following drive when Wilson hit McQueen on quick slant and then McQueen scampered 43-yards untouched to the end zone. Wain’s kick gave the Bulldogs a 35-0 lead.

W.S. Neal then put together a long scoring drive capped off by a 3-yard score from Noah Hill. The Eagles’ De’Ron Smith added the two-point conversion.