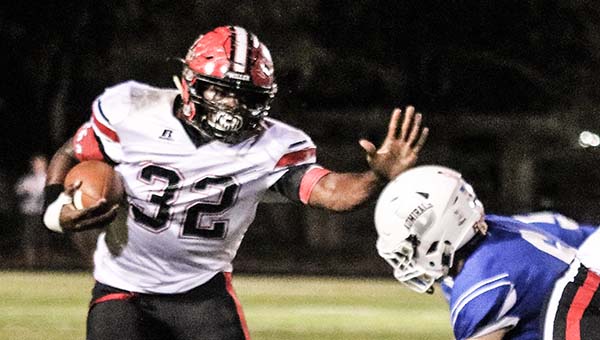 A breezy, cool night welcomed a gridiron battle between Class 3A Region 1 rivals T.R. Miller and Bayside Academy. The two team’s records were identical going into the game, but it would be the Tigers moving up the ladder, defeating the Admirals 28-23 to take sole possession of second place in region standings.

“I thought we played really well,” said TRM head coach Andrew Thomas. “We had an opportunity to put them away where we fumbled the ball, and they recovered for the score. But I’m just proud how we kind of brushed that off, got the ball back and drove down the field to score.

So it’s a good sign of our maturity, leadership, coming into our own and our ability to take a punch and hit right back,” he said. “That’s what T.R. Miller is all about, having the mindset and the ability to keep pushing through.”

Running back Michael Campbell scored three touchdowns as a workhorse for the Tigers, carrying the ball 31 times for 121 yards.

Bayside struck first with 5:25 to play in the first quarter when quarterback Charles Norton took advantage of a cornerback blitz by the Tigers to find senior speedster Henry Wise on a slant route. Wise split the Tiger safeties to take the ball 83 yards for the touchdown. Kicker John Douglas added the PAT to give Bayside a 7-0 lead.

Miller wasn’t down for very long as the Tigers completed a four-minute drive with a Campbell one yard run up the middle for the touchdown. Kicker Matthew Morgan added the PAT to tie the game, 7-7.

With 9:38 to play in the second, Miller found the end zone again on its biggest scoring play on offense for the night when quarterback Caleb Winton found senior Jo Jo Booker for a leaping catch down field for a 65-yard touchdown. The added PAT gave the Tigers a 14-7 lead. Douglas connected for a 12-yard field goal to trim the Tiger lead to 14-10. Bayside was threatening to score again late in the second, but Tiger defender Joshua Jolly had other plans making a clutch interception inside the Tiger 10-yard line. The half ended with the Tigers leading 14-10.

Just below the nine-minute mark in the third quarter, Campbell broke free behind his offensive line for a 14-yard touchdown. The Tigers added the PAT to lead 21-10.

The Tigers made a defensive stand on Bayside’s first possession of the third quarter to force a Bayside punt. After receiving the punt, the Tigers had the ball on its own 18. Quickly the game shifted in favor of Bayside when the Tigers fumbled the ball in the backfield on its first play of the drive. Bayside defensive lineman Cassity James scooped the ball up and took it to the end zone for a touchdown. The PAT was good to make the score 21-17, Miller.

After the blunder, Miller recovered late in the third when Campbell scored his third touchdown of the evening with a four-yard run. Morgan added the PAT to extend the Tiger lead to 28-17.

In the fourth quarter Bayside believed it was far from done when Norton connected with Wise for another touchdown, this time good for 20 yards. Bayside failed on the two-point attempt, making the score 28-23 which remained the final after a failed attempt of an onside kick by Bayside and the Tiger’s defense ability to keep Bayside’s offense from achieving any late game heroics with seconds to play in the fourth.

Notable performances by the Tigers were by Booker with five catches for 108 yards and a touchdown on offense.

As well as a stellar performance on offense, Campbell had a sack and two tackles on defense.

The Tigers will travel to play Clark County (4-4) this Friday.