A Brewton businessman was arrested last week following allegations he was trading services for sexual favors. 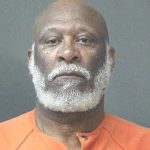 Sgt. Patrick Caylor with the Brewton Police department said 66-year-old Forrest Lett is charged with one count of solicitation of prostitution and one count of first-degree sexual abuse.

“We received information that alleged Mr. Lett was exchanging the services of his business Lett’s Bail Bonding in exchange for sexual favors,” Caylor said.

Lett was taken into custody without incident last Wednesday and booked into the Escambia County Detention Center and released on a $7,500 bond.