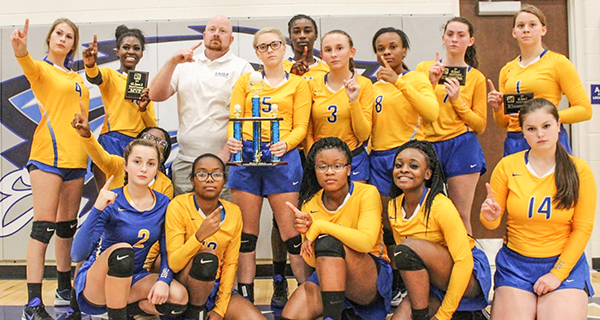 photo by Wanda Waldrop
The W.S. Neal volleyball team defeated Escambia County to win the Class 4A Region 1 title the past Tuesday.

The W.S. Neal Eagles volleyball team was eliminated in the super regionals by Hale County, 2-3.

WSN coach Jason Blaney said he was proud how the team fought back after losing the first two sets.

“In that fifth set, we came out with so much momentum, and we hurt ourselves with multiple attack or serve errors,” said Blaney.

“The ladies fought the entire match, and I was so proud of their effort.”

Despite what happened at regionals Blaney said what will not be lost is the team’s accomplishments over the course of the season.

“It takes nothing away from what we accomplished this year at Neal,” Blaney said.  “The most wins ever in a season and our first ever area championship.  We had five seniors that helped lead us to a 17-6 record.  Losing them is going to be tough, and they set the bar high, but we have incredible talent returning and some very talented young girls ready to step up.”

A part of the turnaround season was the winning of the area tournament. WSN defeated Escambia County 3-2 to win.

Stuckey and Scott were named to the Area All-Tournament. Samuel was named tournament MVP.