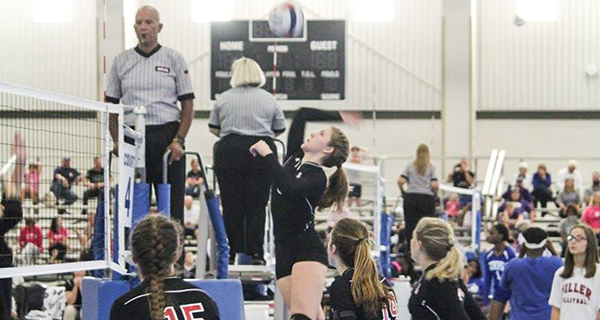 The T.R. Miller volleyball team went 3-1 in the 3A South Super Regional Tournament in Montgomery last week. The 3-1 record earned a third seed spot from the South region for the Lady Tigers in the state tournament to be held in Birmingham Oct. 26-27.

Leading Miller was Allie Nelson with 15 kills; Grace Ruzic with 9 kills; and Myra Reiss with 25 assists and 9 aces.

Leading Miller was Nelson with 12 kills, 3 aces and 7 digs; Mallori Floyd with 10 kills and 4 aces; Grace Ruzic with 8 kills; Reiss with 25 assists; Taylor Austin with 12 kills; Caitlyn Smith with 13 assists; and Madison Douglas with 8 digs.

Austin led TRM with 5 kills; Floyd and Nelson had 4 kills each.

“We played pretty solid throughout the two days,” Peacock said. “Going into  Friday’s game against Providence Christian (ranked No. 5 in the state) it would have been easy for us to let the name on their shirts intimidate us. We may not have won the game, but I was impressed with our willingness to compete.”

TRM had to wait over four hours between the Beulah and Opp game before the team could hit the court again. Peacock said she’s proud of how the team responded despite the setback.

“Often times that can affect your game when you enter back into play,” Peacock said. “However, I was extremely proud of all 11 players. They weren’t going to settle for fourth place again. The girls on the side court were supplying motivation and energy. It was contagious. I am really proud of our performance at Super Regionals.”

The 3A Volleyball State Tournament will be held Oct. 26-27 at the Birmingham Crossplex in Birmingham located at 2337 Bessemer Road. TRM will play West Morgan Oct. 26 at 11 a.m. The winner will advance to play the winner of Bayside Academy/Plainview in the semifinals. Admission for the tournament is $10 per day.