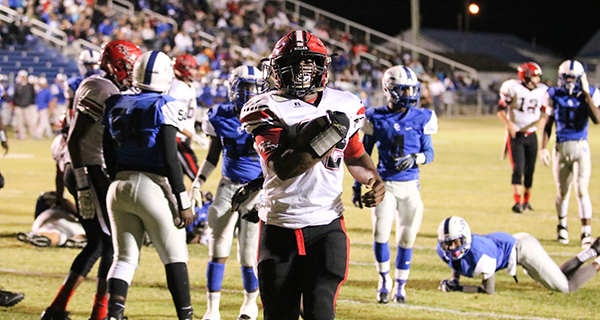 Courtesy photo
Campbell rushes for a TD against Clarke County.

If one didn’t make it to Grove Hill Friday night to watch T.R. Miller play Region 1 foe Clarke County and later saw the final score, he might have been fooled by the 14-point win.

Because it wasn’t that close.

The Tigers broke open an early 14-13 lead midway through the second quarter, scored 28 unanswered points en route to a 49-19 lead before two late touchdowns by Clarke County provided the final margin of victory as TRM defeated the hosts, 49-35.

In the process, the Tigers’ quick-strike offense was paced by workhorse running back Michael Campbell, who rushed for 126 yards and a pair of touchdowns, while senior quarterback Caleb Winton accounted for three touchdowns of his own. He tossed a pair of TDS (68 and 35 yards), both to JoJo Booker, and ran for another score. Winton threw for 124 yards, all but 10 of those going to Booker on three completions.

The win for the Tigers (7-2), 6-1) was the sixth straight over Clarke County, dating back to 2008. They have won 32 of the 35 meetings between the two schools. In addition, the Tigers built their record to 86-1 all-time when scoring more than 40 points in a game.

“I thought we played with a lot of heart,” said first year T.R. Miller coach Andrew Thomas after the Tigers’ fifth straight win and seventh out of their last eight games. “Week by week we are getting more physical and taking over games.

“I am proud that when the game was close (when the Tigers held a 1-point lead), we responded to everything they did and took control of the game in the latter part of the first half. We scored 35 points in the second and third quarters and put it out of reach against a very athletic and talented Clarke County team.”

T.R. Miller proved early it could gain big chunks of yardage, as Campbell’s first two runs went for 29 and 33 yards. That second run by “Soup” following a Clarke County punt set up his team’s first score as Winton kept the ball on the veer and sprinted to the pylon for an 8-yard TD to open the scoring early in the first quarter. Freshman kicking sensation Matthew Morgan booted the first of his seven PATs to make it 7-0.

Clarke County answered with a pair of scores to take its only lead of the game, 13-7, when Booker blocked the extra point attempt.

Then, two plays following the ensuing kickoff, Winton connected with Booker on a screen pass, and Booker raced down the sideline for the 68-yard score. After Morgan’s PAT the Tigers never relinquished the lead.

The Bulldogs aided the visitors on the first play after by fumbling the snap and Campbell recovered at the Clarke County 22-yard line. Soup then carried all four times in the drive, capitalizing on the turnover with a 3-yard run to make it 21-13.

After the hosts closed the lead to 21-19 midway through the second quarter, the Tigers made it 28-19 when Soup again carried the load with four rushes and a 9-yard pass from Winton. He accounted for all 45 yards, culminating the drive with another 4-yard run to close out the scoring in the first half.

Senior Henry Davidson electrified the crowd when he took the opening kickoff of the second half and broke free for a 77-yard touchdown to make it 35-19.

From there, the Tiger offense fed Clarke County with a steady diet of bruising fullback Terence “Butterball” Hall and Campbell, keeping the ball on the ground and eating time off the clock.

Following a Jalen Walker interception, the Tigers put the final score on the board when eighth grader Narkavis Campbell finished a 9-play, 47-yard drive with his first career touchdown on a 9-yard run.

Clarke County scored a pair of late-game touchdowns and two-point conversions to finish the scoring and provide for the final score.

The Tigers return home this week in preparation for the Battle of Murder Creek, where they will host rival W.S. Neal (3-6). TRM holds a 51-22 all-time record against the Eagles.