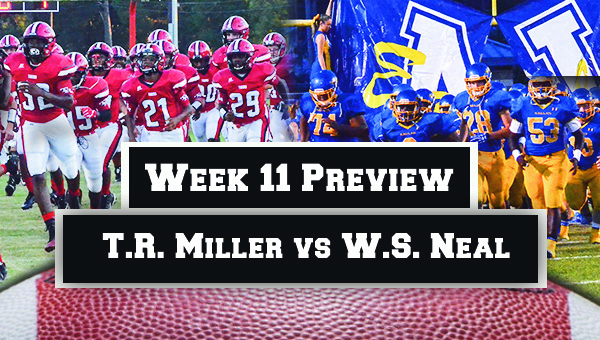 Rivalry set for Friday. Control upfront key for both teams

The towns of Brewton and East Brewton will descend to Brewton Municipal Stadium this Friday, as the Class 3A, No. 6 ranked T.R. Miller Tigers will host the W.S. Neal Eagles­ in the annual Battle of Murder Creek.

While playoff implications aren’t at stake for either team, bragging rights are. The series has gone back-and-forth in recent years, but it’s the Eagles who brought home the most recent win of the rivalry.

The Eagles who have struggled throughout the season with a scarce lineup are coming off one of its better games of the year last week with a win over Escambia County. The rushing game was hitting on all cylinders as the backfield accumulated over 300 yards for the game. The Eagles offensive and defensive line proved too dominate for the Blue Devils.

Strength in schedule may pay dividends for Neal, especially for its young players.

“I think our strength of schedule has forced our young kids to grow up faster,” WSN head coach Doug Hoehn said. “With that being a factor and what the team has been through this season, I think its put them on a faster pace then it would have been if circumstances were different.”

Both teams like to run the ball, said Hoehn. With that being said, who controls the line-of-scrimmage may be the key matchup.

“Watching them, I see [Miller] is improving on a weekly bases,” Hoehn said. “I think the battle up front is going to be important. I think their run game is strong so we’re going to have to play tough up front.”

Hoehn said TRM has some playmakers on both sides of the ball.

“They have a good quarterback,” Hoehn said. “We’ve seen [No. 12, Caleb Winton] the last couple years. He does a good job managing the game. He doesn’t do anything to hurt his team. They also have a couple capable running backs that run the ball hard for them. I think they have a very good athlete in [No. 14, JoJo Booker]. I think he’s had a good year on both sides of the ball at wide receiver and free safety. He’s also making big plays on special teams. He’s the type of kid that just does it all. He’s a playmaker that’s a big part of the team’s success. We’re going to have to account for him on the field. [No. 43, Tyrese Nicholson] is a good player for them on defense,” he continued.

“He has a good motor. He runs to the ball well. He’s another player we have to account for on the field.”

The Tigers are coming of a convincing win over Clarke County last week. The passing connection of Caleb Winton and Booker was in full affect and running back Michael Campbell had another stellar game eclipsing the 100-yard plateau for the fifth time this season.

With WSN rolling into town this week, TRM head coach Andrew Thomas, a newcomer to the rivalry, said Friday’s game is one of those special games players, coaches and the community always mark on the calendar.

“You always want to be involved in games like this,” Thomas said. “The best part will be Friday night when the atmosphere is there. There’s a big build up for this game. One of the first things I was told when I applied for this job was the Miller and Neal rivalry. For both programs to be involved in a game like this, that is well known not just throughout the state of Alabama but even nationally as far as high school rivalries, is special. It’s one of those games why you love doing what you do. I love having a chance to be a part of it.”

Thomas said a key matchup of the game will be at the line-of-scrimmage.

“(WSN) is a real physical team,” Thomas continued. “We’re going to have to match their physicality. Even more than that, we want to win the physical match. With a game like this there will be more emotion involved. They’re going to get the best from our team. We’re expecting nothing but the best from them. They’ve had to battle through some injuries this season, but we’re not going to take them lightly,” Thomas said.

“There’s no doubt our players are ready for Friday,” Thomas said. (Reminders of last year’s score of 26-17 is plastered everywhere at the field house). We’ve brought in a speaker everyday to kind of remind them on what this week means. Just those constant reminders instills that every minute we have on the practice field goes to use being prepared for Friday.”

Hoehn said he expects both teams will be ready to play as well.

Weather is forecasted for clear skies with a low of 56 degrees Fahrenheit. Kick off is at 7 p.m.