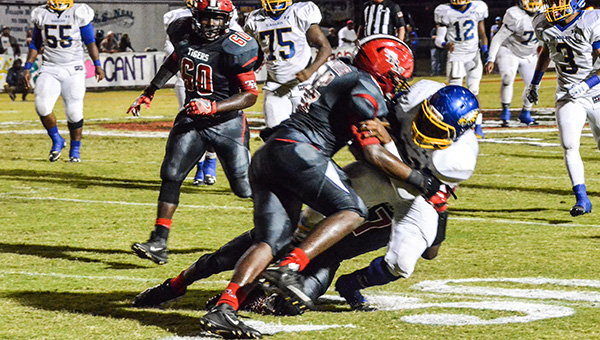 Corey Williams | The Brewton Standard
Two Tigers take down an Eagle ball carrier on Friday. The Tigers won the game 35-6.

On the 70th anniversary of the Battle of Murder Creek between the T.R. Miller Tigers and W.S. Neal Eagles, it was the Tigers who would hoist up the trophy, defeating Neal 35-6.

T.R. Miller head coach Andrew Thomas said the team knew it was going to be a tough, physical game and his team was able to rise up to the challenge.

“We knew (WSN) was going to come out with a lot of energy,” Thomas said. “But we felt if we survived that early surge from them our chances were good. I think our conditioning and our preparation kind of took over in the second half. I couldn’t be more proud of how the kids have bought into everything. It doesn’t get any better than this, to pull away like that in the second half. I’m just proud of the way our kids just fought, fought and fought. We had to restore order in Brewton.”

Both offenses got off to rocky starts. On the Tigers first play in the first quarter, runningback Michael Campbell fumbled the ball. Neal’s Sharquinton Green was able dive on the fumble to give Neal the ball at the Tigers 41. The Tiger defense still kept the Eagles out of the end zone forcing Neal to punt on its first two possessions. The game remained scoreless at the end of the first quarter.

The Neal offense was able to get things going in the second quarter concluding a four-minute drive with a 4-yard run up the middle by junior Kristian Taylor. The Eagles missed the PAT, taking a 6-0 lead.

It didn’t take long for Miller to respond. Campbell redeemed himself with a 17-yard touchdown run 30 seconds later. Freshman kicker Matthew Morgan added the PAT to give Miller a 7-6 lead.

With 3:45 to go in the second quarter, Miller struck again in a big way. Campbell weaved behind his blockers eventually breaking it down the Tiger sideline for a 50-yard touchdown. Morgan added the PAT to give Miller a 14-6 lead.

The Eagles were threatening to get on the board again with seconds remaining in the first half. Neal quarterback Jacobey Hawthorne rolled to his left for a throw to the end zone. Hawthorne’s pass was deflected by Campbell first before falling in the hands of cornerback Jalen Walker for the interception in the end zone. The half ended with the Tigers leading 14-6.

The Tigers scored again in the third quarter on a 5-yard run by Campbell. The drive jumpstarted after an interception by safety Jo Jo Booker. Miller added the PAT, extending its lead to 21-6.

Apparently Booker wasn’t done making plays in what was already a stellar night on defense for the senior. With 7:34 to play in the fourth Booker intercepted a Hawthorne pass and returned the pigskin for a 25-yard touchdown.

“I almost had a pick-six earlier in the game and I got tripped up,” Booker said. “On that last one I was like ‘Finally this is my chance.’ It was my first pick-six this year. It felt good not to only get the pick-six but to kind of stick the dagger in them too.”

Miller scored again with three minutes to go in the fourth on a 29-yard run by Michael Campbell, his fourth touchdown of the night. Morgan added the PAT to seal the victory for Miller.

Booker had three interceptions to lead Miller. Campbell finished the night with 12 carries for 148 yards to go with his four touchdowns.

Offensive leaders for Neal were Hawthorne with 82 rushing yards and junior Marvin Maddox with 15 carries for 72 yards. Ricky Samuel recorded a sack and a couple tackles on defense.

Neal had 248 total yards for the game. Miller had 179 total yards. Neal had 15 first downs, compared to Miller’s seven.

“We played a good team tonight,” said WSN head coach Doug Hoehn. “We had way to many turnovers and penalties to give ourselves a chance and you just can’t do that. Both teams played hard, but the difference in the ball game was our penalties and our turnovers.”

WSN finishes its season 3-7. The Tigers finish its regular season 8-2.

Miller will host Wicksburg (7-3) in the first round of the playoffs on Friday.