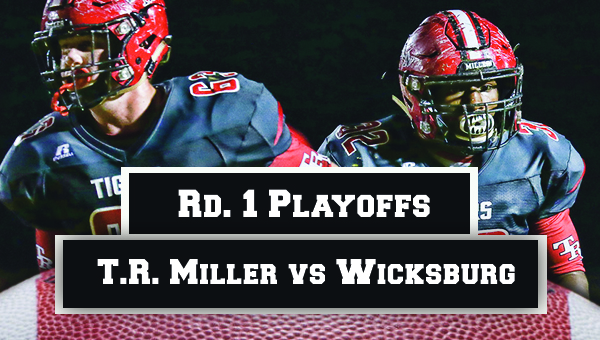 The Class 3A, No. 6 ranked T.R. Miller Tigers will host the Wicksburg Panthers in the first round of the playoffs on Friday.

Wicksburg is coming off a 45-14 win over Ashford. The Panthers are currently on a six-game winning streak heading into Friday. The team is averaging 37 points per game, while surrendering 24 points per game.

“(Wicksburg) wants to run the ball,” Thomas said. They have a good athletic quarterback [No. 7 Tucker Driskell]. They have a couple skill kids they like to get the ball to on sweeps. Their running back [No. 44, Shawn Bowden] is a full back type player who runs the ball well. The big key is containing (Driskell) in the spread offense. They do throw the ball as well, but their strength is in their running game.”

Out of 495 plays through the first nine games of the season, the Panthers have ran the ball 370 plays which is 75 percent of the time.

Driskell has been the leader on offense at the quarterback position throwing for 1,226 yards and six touchdowns and rushing for 674 yards and five touchdowns. Serving as workhorse in the backfield is the junior Bowden carrying the ball 151 times for 932 yards and 19 touchdowns through the first nine games this season. Arguably the team’s best all-around player this season has been junior, No. 8 Ethan Wells. On offense Wells has rushed for 444 yards and four touchdowns. On defense he has 62 tackles, two interceptions and one fumble recovery. The Panthers best tackler on defense has been No. 60, Trent Hatcher.

“(Wicksburg) has been playing well lately,” Thomas said. “It’s an opponent we can’t overlook. The key for us is not turning the ball over. When we don’t turn over the ball we’ve been successful.”

The Tigers are currently on a six-game win streak, averaging 37 points over the stretch, while surrendering 20 points.

Weather is forecasted for clear and mild with a low of 60 degrees Fahrenheit. Kick off at Brewton Municipal Stadium is at 7 p.m. Admission is $8 at the gate.