Tigers lose to Wicksburg in first round, 34-28 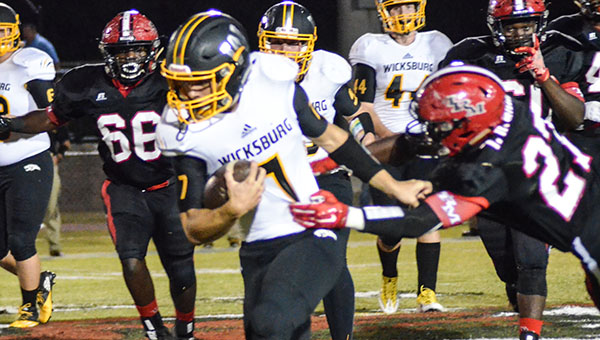 The T.R. Miller Tigers suffered an early exit out of the playoffs at the hands of the Wicksburg Panthers Friday night, falling 34-28.

The Tigers had three turnovers in the game, twice via the fumble and one interception returned for a touchdown in the third quarter.

“(Wicksburg) did a lot of stuff that put us in a bind,” said TRM head coach Andrew Thomas.

“Our kids fought hard. We kind of had to shuffle some guys around with injuries, so we had some guys playing out of position a little bit. We played tough, but just too many mental mistakes on both sides. We gave them three possessions on turnovers and we lose by a possession. That’s what it kind of boiled down to.”

Miller received the ball first to begin the game. On the second play of the drive the Tigers went to its bread and butter run game when senior quarterback Caleb Winton handed the ball off to junior Michael Campbell. Campbell found a hole up the middle for a 57-yard run to the endzone. Kicker Matthew Morgan added the PAT to give the Tigers a 7-0 lead.

The Panthers responded with a four-minute drive. Quarterback Tucker Driskell connected with Ethan Wells for a 31-yard exchange to put the Panters inside the Tiger’s 5-yard line. From there the Panthers called on its bruising running back Shawn Bowden to finish the drive with a three-yard run up the middle. Kicker Ashton White added the PAT, tying the game at 7-7.

In the second quarter with 3:11 to play Wicksburg was threatening to score inside the Tiger 10-yard line. Driskell found 6 foot 3 wide receiver Nickolas Turvin one-on-one in the endzone. Turvin made a leaping catch for a seven-yard touchdown to give the Panthers the go-ahead lead. White added the PAT to give the Panthers a 14-7 lead.

Miller responded quick. The Tigers gave the Panthers a dose of its backfield. Senior Terence Hall hit defenders with runs of 19 and 18 yards. Campbell received a pass from Winton good for 19 yards. Campbell closed the drive out with a one-yard run. Morgan added the PAT to tie the game 14-14.

Wicksburg looked to score again before the half. With 27 seconds before halftime, Driskell found senior Hunter Rainey for a 25-yard touchdown. White added the PAT and the Panthers took in a 21-14 lead at the half.

Late in the third quarter, the Panther defense responded with a play. Winton look to his right to make a throw. The senior’s pass would be intercepted by Wells who made the catch in stride, taking the pigskin 33-yards for the touchdown. The Tigers blocked the PAT. Wicksburg led 27-14.

The Tigers need a big play and found it in the duo of Winton and Jo Jo Booker. With 1:43 seconds to go in the third Winton stepped up in the pocket and spotted Booker facing one-on-one coverage. With confidence Winton unleashed a 33-yard bomb to the athletic Booker in endzone. Booker made the catch look easy. Morgan added the PAT. The Panther lead dwindled 27-21.

Again Wicksburg responded with a successful drive that culminated in a sweeping run to Wells for a one-yard touchdown. White added her fourth PAT of the game to give the Panthers a 34-21 lead.

It didn’t take long for Miller to score. With 8:07 left to play, Hall received the handoff up the middle for a one-yard touchdown. Morgan added his fourth PAT of the game to make the score 34-28 in favor of Wicksburg.

The Panthers were determined to play keep away the remainder of the game, a combination of penalties and timely runs on short downs by the Panthers made the Tigers biggest enemy the clock. On a decisive fourth and one, with no time outs, and 1:15 to play in regulation Driskell was able to force a Tiger offside penalty. The penalty gave Wicksburg a first down, and dashed the hopes of the Tigers from advancing to the second round of the playoffs.

Leading the Tigers was Michael Campbell with 17 carries for 130 yards and three touchdowns; Jo Jo Booker with five catches for 95 yards and a touchdown; and Ty Lett with nine tackles and a sack on defense. Caleb Winton was 10-15 for 152 yards, a touchdown and an interception.

Wicksburg will advance to play Gordo on the road this week.

The Tigers finish its season 8-3.