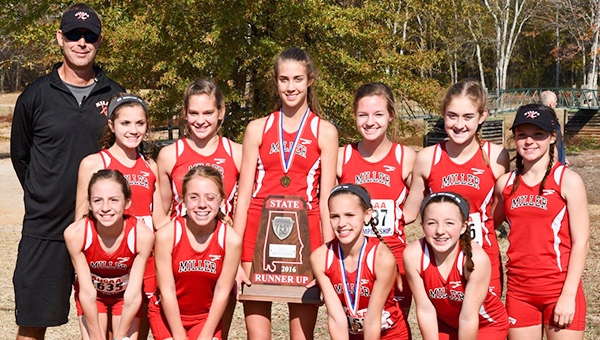 Courtesy photo
Pictured is the T.R. Miller girls XC team and Coach Rob Atkinson at state in Oakville. The team finished in second place. Senior Allie Nelson (center) led all in the girls’ division with a time of 18:53.29.

Leading the pack was senior Allie Nelson, who finished in first place in the 5,000-meter run with a time of 18:53.29. Nelson bested second place finisher Becky Billman of American Christian Academy, who finished the race with at time of 19:29.76.

Nelson said it was exciting to win state.

“This is one of my favorite races of the year,” Nelson said. “It’s a nice course, and the competition is always great. I’m also happy that as a team we placed second. My team worked really hard and had a good year. We were a really young team and to get second at state in 3A is a very good accomplishment.”

“Allie (Nelson) really stepped up and ran her best race of the year,” Atkinson said. “It wasn’t her best time, but I think it was her best race. The whole second part of the race she had a good lead over everybody else. She did a magnificent job and capped off what has been a stellar career for her. I couldn’t be more proud of her.”

Eighth grader Olivia Blackmon cracked the top 10 as well, placing seventh overall with a time of 20:25.51. 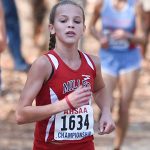 “It’ll be tough losing Allie, but we have some really young girls coming on that can make us an even stronger team than what we had this year. We’re going to have more girls in the range of 21:30 and 20 minutes.

“Olivia Blackmon had a very strong race as one of our young runners. The key to our success this year was Carmen Knowles and Payton Baxter being the great senior leaders they were helping develop our young seventh and eighth graders. I’m really pleased on how the team finished this season and our outlook moving forward.”

Other run times for the girls’ team were:

The boys team finished sixth overall in its respective division. Leading the team was Travis Carlson, placing 18th with a time of 17:56.81. 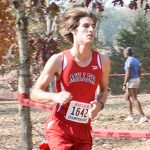 Atkinson said the boys team didn’t run its best race, but nonetheless is proud of the progress the team has made with each meet.

“This was the best boys’ team I’ve had since I’ve been here,” Atkinson said.

“Everyone was capable of running under 19-20 minutes this year. That’s a really big accomplishment for us. (American Christian) had a very strong meet. Twenty-four points is unheard of. They’re just really talented right now.”

Other run times for the boys’ team were: